It's almost breaking up time!

Today we transferred 650 litres of "Profits of Doom" into conditioning tank 8 where it'll stay until the new year; it'll then be dosed with 4kg of crushed Ferrari's coffee to make it a coffee milk stout, a sub-style which is getting very popular at the moment and Gazza is convinced will work really well with this brew.

The rest went into cask and keg with most being as brewed although 5 casks had coconut flavouring added to them to give a luscious complex flavour; we'll also be bottling some of this too!  So, there will be 3 variants of this brew, and I'm hopeful they will all be lovely in their different ways....

Tomorrow we're casking up the final tanks of "The Boss" and "We Come in Peace" as the first tanks almost sold out in a day last week; once that's done, we flush out the tanks, tidy up and that's it - us done until new year - although one or both of us will be popping by to make sure everything is OK, and Gazza has a few deliveries to make too.

So, if this is the last post of the year (maybe...!) may I wish all our customers, suppliers and drinkers a massive thank you and please keep the hoppy faith - good beer is for life not a passing fad!

The final brew is done, "Mate Spawn and Die" is transferring to conditioning tank for it's sleep over the festive period, "Profits of Doom" is on chill and will be casked and transferred Thursday...  all that remains to do this week is label lots and lots and lots of bottles, wash some casks and fill them with the final tanks of "The Boss" and "We Come in Peace" on Thursday, then that's it for another year!

Seems like this year has flown by and has definitely had it's ups and downs, but hopefully next year will see us brew even better beer and, hopefully, lots of pubs and wholesalers  still wanting to buy and lots of people wanting to drink it!
Posted by Gazza Prescott at 14:49 No comments:

I'm not sure the "milk stout" category is that well know these days outside the beer enthusiast community (where there have been a lot made recently, generally with added salt and caramel and/or other undesirable flavours) but it's about time it was, as it's a historic beer style which deserves a lot more interest from the more "normal" beer drinkers.

So, what makes a "milk" stout then?  The simple answer is the addition of lactose powder, a sugar derived from milk - see, it does make sense!  The reason milk stouts are sweet is that lactose isn't very fermentable by brewer's yeast and a decent percentage of the sugars remain in the beer giving it a thick, luscious body and sweet taste which is ideal for balancing with other flavours such as coffee, coconut, chocolate and dozens more; it's a very versatile beer!

Our brew will be split into two variants with one tank being the "straight up" version and the other dosed with coconut or coffee - we've not decided yet - which will give the finished beer a big boost of flavour to go with the existing toasted, roasty stout character.

What of the name?  Well, it's our take on a track by Type O Negative, and also a very thinly veiled comment on the current gung-ho policy being taken by parliament.

So, look out for this brew in early 2016 and, as usual, all feedback is very welcome; cheers! 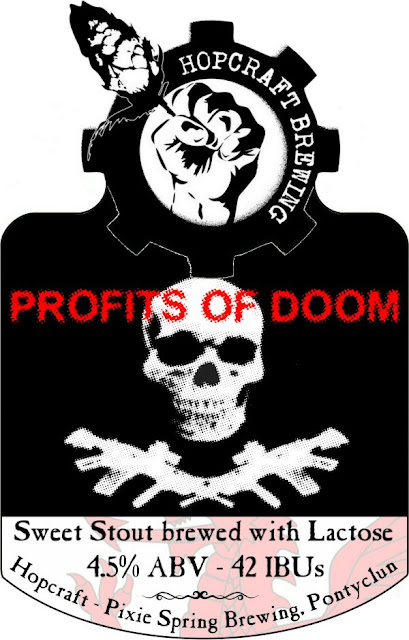 Posted by Gazza Prescott at 23:03 No comments:

Transferring from FV to CT

Today we transferred "We Come in Peace", the new US Amber hoppy beastie, to conditioning tank from the FV, where it'll be dry-hopped Monday with the strawberry-fruity New Zealand hop Waimea.

In case you don't know what this process looks like, here's the empty fermenter after transferring the contents to conditioning tanks 5 and 12; the second photo shows tank 5 being filled. 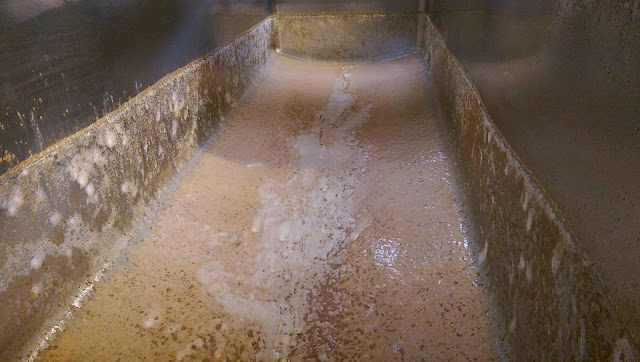 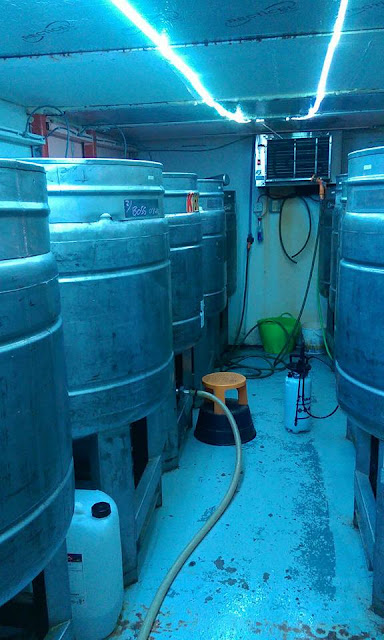 Posted by Gazza Prescott at 18:24 No comments:

We've got a lot of stuff in hand to make next year even better, both quality and interest-wise, so keep the faith hopheads and massive thanks to everyone who's bought and sold our beer this year... 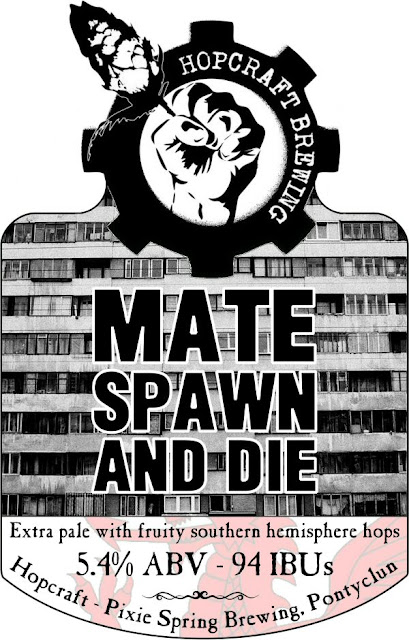 Posted by Gazza Prescott at 16:53 No comments:

It's a bone of contention as to whether a brewery needs core beers or not.  Certainly, back in ye olden dayse they most certainly did, when a mild, bitter, best bitter and perhaps - pushing the boat out a bit here - a seasonal Xmas beer would be brewed, all in the brewery "style" (whatever that was) and all with the same recipe and branding year after year after year, appearing as regularly as Halley's comet.

These days, of course, everything is different; yes, there are still the big brewers (and some smaller ones!) who have a set in stone range and sell these all year, but more and more brewers rely - actually rely, not just benefit - from brewing an ever-changing range of beers in an ever-growing variety of styles to please the baying beery hordes who demand, ever louder, more and more of everything in their beer.

When Dave Unpronounceable and I started Steel City Brewing way back in 2009 we were committed to the "brave new world" ethos of new beers, and lots of them, to satiate the exponentially growing market which we had first-hand experience of; I'd like to think we were one of the first to fully understand the way the UK beer scene was going and, in our small way, influence and encourage this new way of brewing.  We saw that the new way was to produce one-off beers rather than a fixed range and we quickly garnered a reputation for doing just that, which was a pretty rare thing at the time....

How quickly the innovators become the establishment; back then, Brewdog were producing some superb beers and, we're not afraid or embarrassed to admit, were one of our major influences in starting to brew commercially.  Nowadays Brewdog are seen by many beery people as "sellouts", "old hat" and part of the very establishment they set out to change.... six years is a long time in today's beer world!  Steel City itself still exists, despite having moved host brewery three times, but is now in reality part of the pack (albeit still towards the front!) rather than leading and innovating...

When I joined Pixie Spring and created Hopcraft Brewing as our major label I had the clear vision of no core beers as this was a throwback to the old-fashioned "brown beer" legacy I wanted no part of.  Three years later I can look back in the cold light of reality and smile at what has happened; we persevered with a "brown beer" for two years but have finally given up with it, and we're seen (and this isn't my opinion, it's that of quite a lot of beery people I speak to) as brewing high quality, interesting beers; that'll do me!

One thing I've noticed, however, is that we seem to be brewing certain beers with worrying frequency, so much so that some have almost morphed into that hideous throwback to the bad old days, the core beer!  Surely not, how could this happen?

Well, to put it plainly, people want them.  It's all very well to want to make a new beer every time - and we still do, in the main - but we have calls for certain beers and some sell out remarkably quickly once they're on the list; Temple of Love, Citraic, Oceanic and Mate Spawn and Die spring to mind immediately here!  So, have we "sold out" to the corporate steamroller of Capitalism by brewing the same beers regularly?

I'd argue not!  We undertake our interpretation of Trotsky's principle of "permanent revolution" in that even when we brew the same beer we try and improve it each time by critically analysing the previous brew and working out how it can be improved; sometimes the changes are forced upon us (lack of the required hops forcing a substitution, for example), but mainly any changes are progressive and incremental in that only small amendments to the recipe are made so that the beer will taste broadly similar (as far as a small-batch craft beer can be made consistently).  So, for example, we may consider that a beer needs a touch more bitterness, so the IBUs will be upped by no more than 10%, or maybe no Waimea hops are available so we call in the considered substitution of Rakau....

So, do we actually need core beers?  There is, in my opinion, no definitive answer to this question; some brewers do, some don't, it all depends on your market - ours is more the craft beer and real ale bars who want new/interesting beers each time, so we brew to demand (and Gazza's ethos and tastebuds!).  We definitely couldn't survive on core beers alone as the demand from our customers isn't there, but neither can we eschew semi-permanent beers as some have proven very popular and to not brew them through some doctrine of "new beers only" would be self-defeating and therefore ultimately destructive... so, we take the middle road and brew certain beers in a vaguely regular manner, but applying a continuous improvement policy to them, as well as producing a steady stream of new brews plus reviving the occasional old one if we feel like it!

All this said, we can now said to have a number of vaguely core beers, insofar as they are available relatively regularly!  These are:

Golden Pixie 3.8% - Straightforward session ale with a balanced malt and citrus hop character, designed to be not too scary yet flavoursome and tasty.
Temple of Love 3.8% - A golden, bolshy session ale with a big American hop punch, solid bitterness and a solid malty base.
Oceanic 5.4% - Super pale and super fruity with New Zealand and Aussie hops
Citraic 5.2% - A similar thing but using, instead, the A-list American Citra and Mosaic hops
Mate Spawn and Die 5.4% - Golden, bitter and fruity with a massively floral, fruity and aromatic hop punch from the superstar Aussie hop Vic Secret.

We have other beers which we've brewed more than once, but the above are the ones we keep going back to and fine tuning towards, hopefully, perfection!  Other opinions are available, but the brewers' opinion is final....

With the cold days drawing in we've begun construction of a warm room for our bottle-conditioned beer to enable the yeast to continue to condition and develop the CO2 from the added sugar to carbonate the beer; last winter we'd only just begun bottling and weren't taking it too seriously, but now we are bottling a bit more we want it to be of consistent quality and the only way to ensure it we achieve the required carbonation level is to keep the yeast nice and warm!

Yeast (well, the yeast we use, US05) is a fussy critter and likes to be kept within a certain temperature range else it sulks and either goes to sleep (below about 15c) or starts producing weird flavours and dies (over 25c) meaning to get the best from it the bottles containing the beer and added sugar (for the yeast to feed on and make the CO2 required) must be kept as close to 20c as we can.

Using insulation board and a wooden framework we're building a simple warm room (and office next door to save Gazza freezing to death doing the duty returns in Winter) as can be seen in the pictures below; I'll add more to show work progressing! 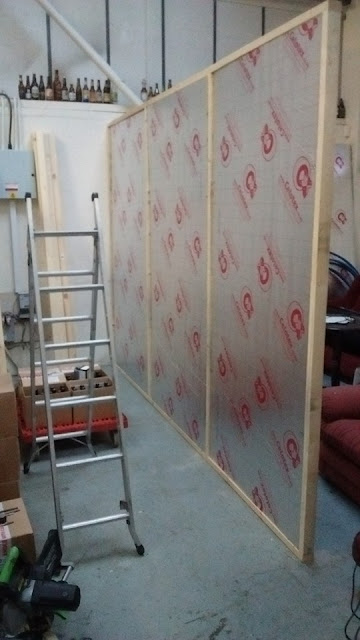 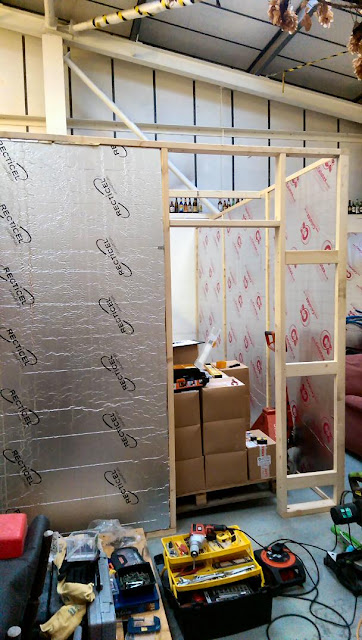 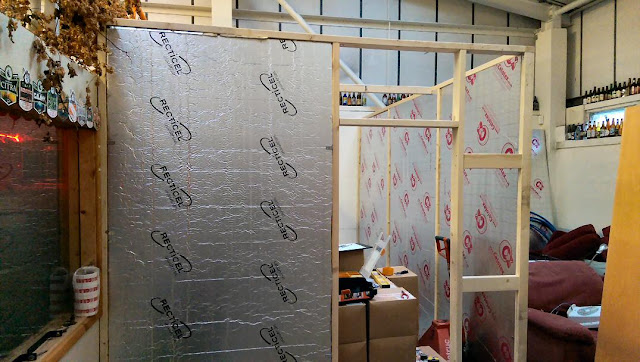 Posted by Gazza Prescott at 00:05 No comments: