Out of beer, and other stories...

Well, not quite out of beer, but it's not far off!!

We've been hammered for sales this last few weeks and, owing to us gallivanting around on jollies and such things, we've just not brewed enough to fill the gaps!  Normally this wouldn't be a problem, but such have the level of sales been recently we're now on a mad beer replenishment mission...

This week we're delivering to London, then brewing twice to try and get the stocks of beer up a bit!  Wednesday sees us creating a new beer, "Path of Least Resistance", which will be a very pale brew with Summit, Chinook and Cascade then dry-hopped with a new US dwarf hop so new it hasn't even got a name yet; it's called ADHA-464 and it smells pretty damn fruity in the Citra vein, although we'll see what comes out of the casks before comparing it to anything so amazing!

The other brew will be a new version of the award-winning "Slave to the Wage" pale ale which uses lovely New Zealand hops - Green Bullet, Waimea and Rakau - and promises to be even better than the original version.  Or so Gazza reckons.... 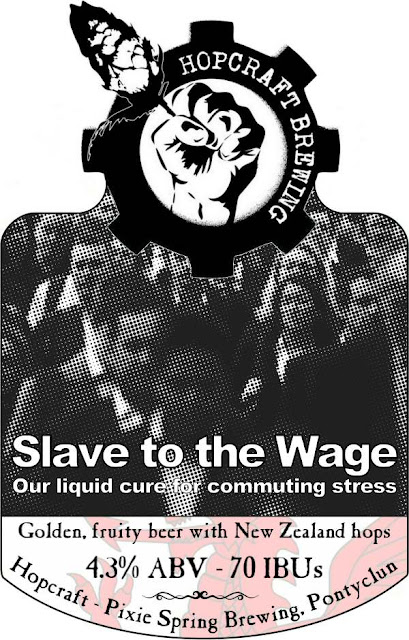 Posted by Gazza Prescott at 20:32 No comments:

A view not often seen!

This is a view into our conditioning tank 12 with Mosaic and Cascade pellets just added; within a day they will have broken up and be in suspension then, after a few more days, will sink to the bottom of the tank, by which time they will have given up their lovely fruity and citrussy flavours and aromas. 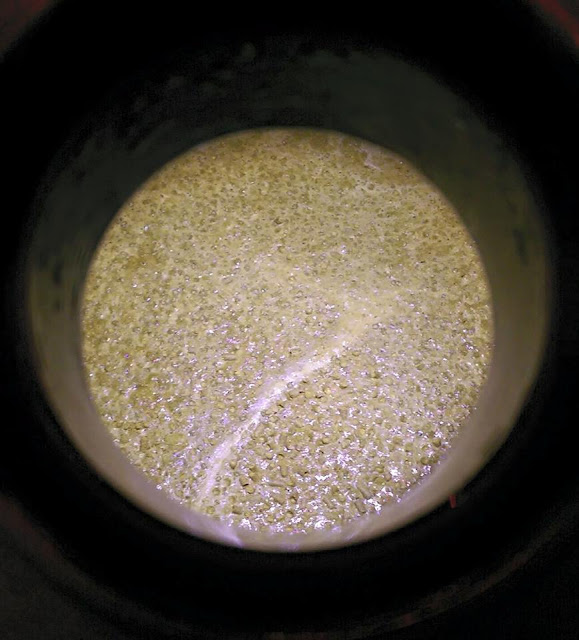 Posted by Gazza Prescott at 22:40 No comments:

The Deutsch Projekt is reprised!

Well, you thought it had finished... and in truth, so did we.... but no, for one last time (maybe...), we present a Deutsch Projekt beer!

This series of brews - tomorrow's is number 5 - was devised to showcase the new wave of German hops which are challenging the accepted wisdom that all German hops taste like chewing a privet hedge (well, to be fair most of them do...) and that there might be something else to offer in the hop department from the world's biggest hop producing nation, namely some new world-esque flavours.

All beers have had a very similar - sometimes identical - malt base (mainly low colour Propino with a touch of wheat and Melanoidin), and a 3 out of the 4 have had the same base hop (Opal) to keep comparisons between the hops fair.

And there we thought it would end.  However, we'd used Opal as the base hop in brews 1 to 3 which had caused a flutter of interest as it seemed to be quite orangey and characterful despite not being one of the "new wave" hops, albeit it's only 12 years old!  So, a quick board meeting later, and DP5 was on the cards... 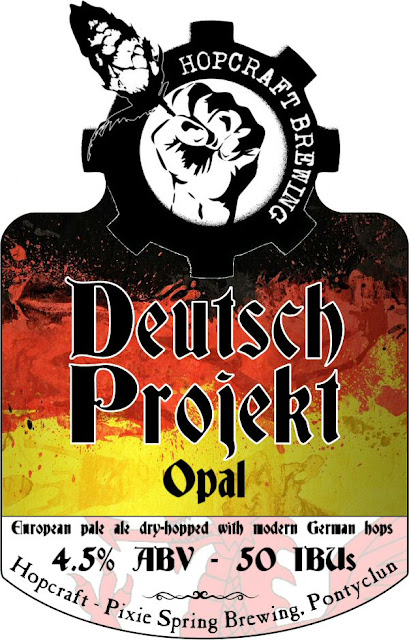 Return of the little bloke

It's been a while since we brewed Napoleon Complex, but quite a few people have been asking for it to return and so, being eminently reasonable fellows, we decided that this was a plan of action worth following, albeit with a few provisos....

The original recipe had been, let's just say, cobbled together as a "store cupboard clearout" brew and so included all manner of hops in small quantities.  Gazza spent an hour going through the recipe and working out a better one although as similar to the original as possible and so, eventually, v3.0 was writ in stone (or more correctly in Beersmith)!

The major change is with the dry-hop; previously, the new German hop Polaris was used (amongst others), but as this tastes like chewing an Eucalyptus bush we've sensibly done away with it and gone 100% with a hop which was in the original so shouldn't alter the finished beer too much... the illustrious Nelson Sauvin. 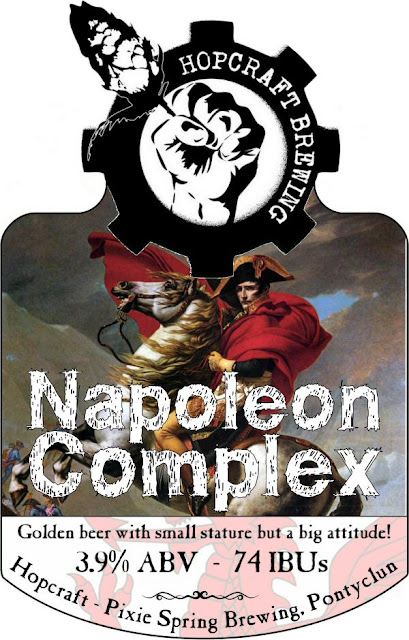 Posted by Gazza Prescott at 16:43 No comments:

Tuesday 4th August saw us welcome the two Kevs and Tufty to the brewery to brew up a split batch of beer; one half would become Golden Pixie, whereas the other half would become a special for Newport RFC's beer festival in late August.  This splitting would be done in conditioning tank with Golden Pixie receiving Cascade and Citra hops whereas the Pixie on Parade would be dosed with a larger amount of Cascade with an addition of blackcurranty Mosaic hops.

The brewday went well, the beer ended up in FV1 almost exactly on gravity, and all being well the beers will be out and about in a couple of weeks; Newport RFC beer festival is held at the club's Rodney Parade ground on Friday 21st / Saturday 22nd August, see here for details and if you can make it there will be a good range of mainly local beers.