We're doing two 1500 litre brews this week, as per normal these days...

First up tomorrow is "Graveyard Eyes", our Sorachi Ace porter, with a slightly revised recipe - both malt and hops - which went down really well on it's first outing last autumn so we thought it was time to bring it back, albeit version 2!

Second will be a new beer of low ABV (around 4%) with mainly European hops such as Mandarina Bavaria, Triskel and Kazbek for sociable spring drinking; we've not finalised the recipe (or name!) of this one yet but it should be an easy-going yet tasty one.

We're off to Port Street Beer House in Manchester on Sunday for our official keg launch and meet the brewer so come on down from 17:00 to see us put the world to rights, then on the Monday we'll be brewing with Rob and the PSBH team over at Blackjack with the provisional recipe being a Red IPA although this could change between now and then !! 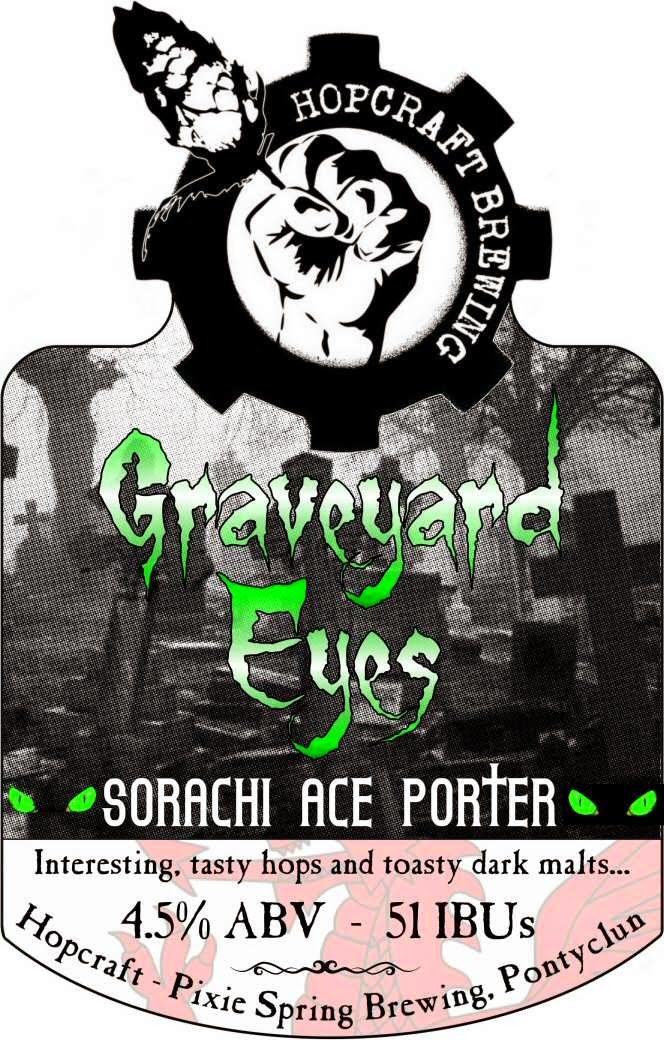 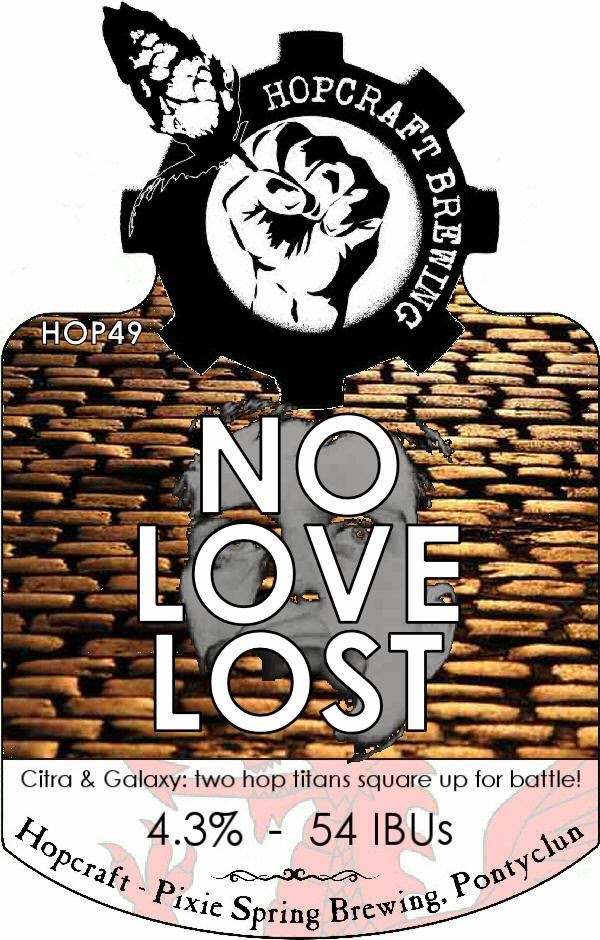 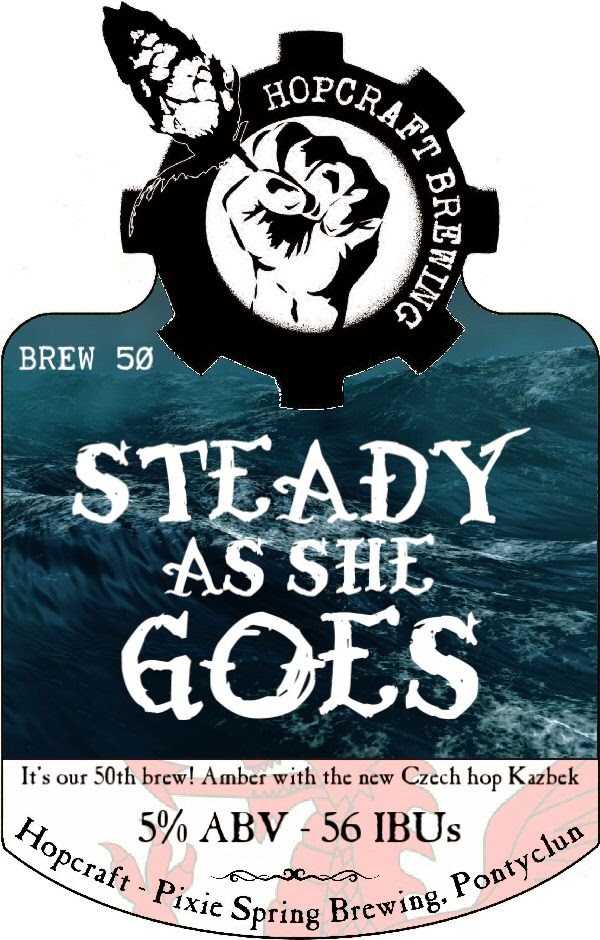 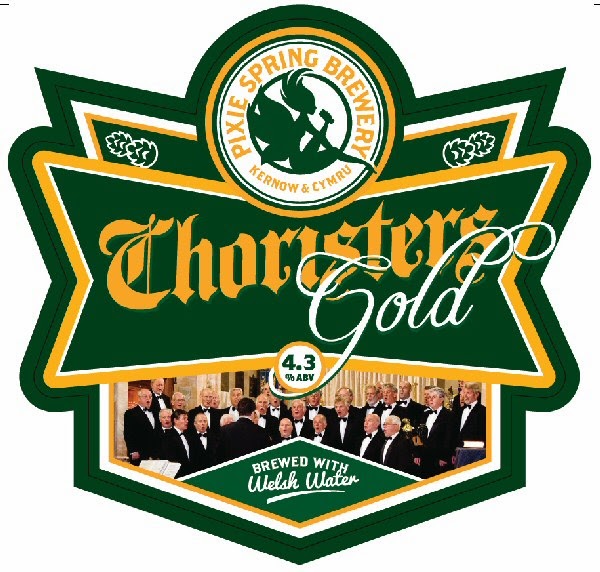 Today we hosted Brian from Northern Monk of Leeds who are due to begin brewing shortly and seem to hold similar views on hops, crystal malt and many other things to us!

We brewed a strong-ish (it should be around 5.7% or so) red IPA - so watch Roger Protz go apoplectic about this further nonsensical beer style - with what must be the biggest hop charge we've used thus far (and probably the most expensive too...!) with over 2kg per barrel of lovely Summit, Citra, Galaxy, Simcoe, Centennial and Chinook all drowned in the name of lupuliciousness.

We're hopeful this will be one of our most interesting and hoppy beers to date so look out for it in a month or so when it's emerged from it's hoppy slumber... It's working title is "Crafty Monk" although this may change if we think of something better in the meantime; any suggestions will be received gratefully although, as usual, the prize is the standard sod-all except for the happy glow of knowing you've helped a worthy cause.  Or so we think.

Posted by Gazza Prescott at 23:42 No comments:

We're nearly ready to begin bottlig our beer!  We have a table, perecetic sprayer, bottle draining tree, capper, bottles and caps... all we need now is the time to prepare the first cask for bottling and get it done which will probably happen in a week's time.

At first there won't be that many bottles, we'll only do enough to cover the orders we have which will probably mean around 120 330ml bottles per brew, but we see this expanding in the future.

Before any of that happens, however, we're rebrewing Citraic this week after it all sold out in less than a week (and got some pleasing reviews!) and we're also going our second collab with Brian from Northern Monk!  Expect a Red IPA with insane amounts of hops in...

Posted by Gazza Prescott at 19:07 No comments:

Today we had a second go at "Craftwerk", a concept which Gazza has long nurtured to make a beer with the best hops Europe has to offer... which, by definition, doesn't include many British ones as I don't like the taste of mouldy grass (Admiral and Bramling Cross excluded)!

Anyhow, our first attempt at this back in October was scuppered - our only failed brew thus far, touch wood - due to contaminated yeast, so this second try has a lot resting on it's shoulders!  It's comprised of the usual low-colour Maris Otter & wheat malt mash with a dash of Weyermann Melanoidin malt for body and colour (a classic German malt which gives amazing malty flavours without becoming toffeeish or sweet) with a complex mix of the "new wave" and old skool European hops;


We were going to add some UK Admiral, IMO one of the best British hops with a characterful flavour of 1p fruit salad chews (honest!), but we'd used them all up on our mahoosive brew of Tidy we did on Tuesday...

So, this should be an interesting brew and, although it won't be a knock-your-socks-off monster in the style of our more usual American or Aussie/NZ hopped examples, it should have enough interest contained therein to make you think twice about European hops; all that remains, once it's fermented, is to stuff 4kg more Mandarina Bavaria into our "hop torpedoes" for dry-hopping and let it gently infuse for a week resulting in, hopefully, a flavoursome and tasty 4.4% golden brew.

Needless to say UKIP members are prohibited from drinking it as it's all foreign hops, coming over here taking our hops' jobs, they're probably all pregnant and wanting benefits too.  And I'd say we don't want BNP or EDL members drinking it either, but they'd probably drown trying to do two things at once like breathe and drink... better they stick to "Ing-er-lish" stuff like Carling, Stella and Heineken then.

(I'm sure you all see the sarcasm - Carling is originally Canadian, Stella Belgian and Heineken Dutch, and if you didn't then you do now.  Don't say we don't fulfill a public service broadcast duty here). 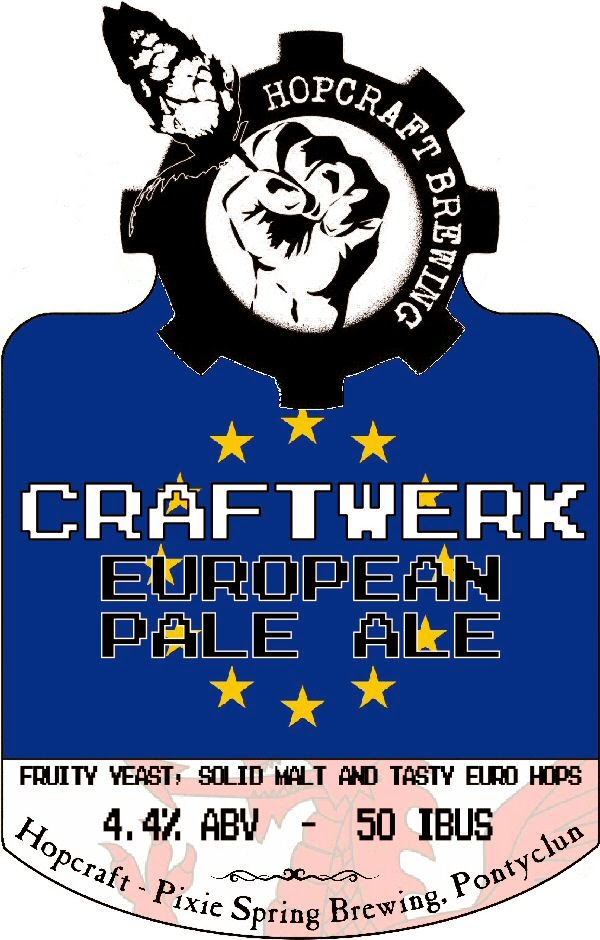 The first bit of our bottling kit arrives

This, in case you've not seen one, is a manual bottling machine (this being a six-head one) which plugs into an FV, tank or cask of beer and automatically fills bottles which we've then got to cap, warm-condition and finally label.

We've not finalised the label designs yet and haven't got a warm room set up, but the first bit of our bottling project is here and we're all raring to have a play with it!

(Update - we now also have our crown capper, caps and draining tree, so all we need are some bottles!) 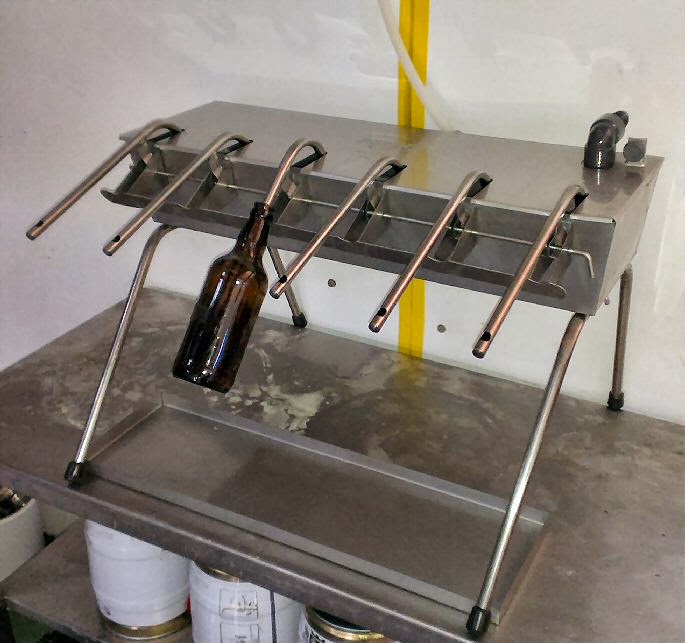 This week we'll be creating our 50th full brew (if you count testbrews and suchlike we've already hit 60, but this is about proper 1500 litre batches) on Thursday; it's to be called "Steady as she Goes" and will be an unusual amber beer with Munich malt and the new Czech hop Kazbek in the mix which, going on my experiences of it in Czech, tastes like lemon meringue pie... I can't wait!

First up though, tomorrow, there's the task of brewing batch 49 which doesn't have a name as yet but will more than probably feature the A-team of Citra and Galaxy hops in a 4.3% or so brew of golden hue... sounds good to me!  The recipe isn't 100% finalised as yet but we've hours to go until we brew it, and we might even think of a name by then ;-)

So, a big milestone for us this week and it's time to reflect that, in a mere 9 months of brewing we've achieved more than I thought we would in 2 years - we're brewing twice a week at present and currently struggling to keep up with demand - and our all-important reputation is growing too with more pubs contacting us asking for beer which is just what I hoped would happen 18 months back when I sent the letter to my then boss telling him where the job I hated so much could be inserted!

A massive thanks to all our customers, drinkers and supporters for your help, encouragement and tolerance during what has been a very steep learning curve for us all and all we can say is THANK YOU and keep the lupulous faith! 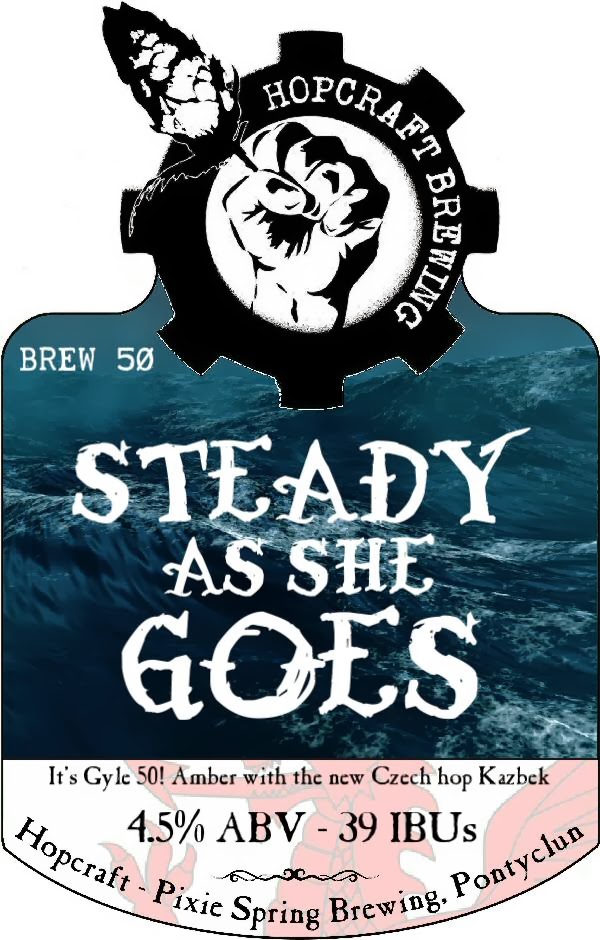 Posted by Gazza Prescott at 20:19 No comments: