Let's get one thing straight - I'm not a massive fan of single hopped beers, to me hops are (usually) good at bittering, aroma or flavour and not many of them can multitask, which I suppose makes them male... (actually, hop cones only grow on the female plants, the males are  not needed; hops are dioecious, which means they have separate male and female plants. Only the female produces the flowers that are used for brewing).

So, against all that's gone before, yesterday we brewed a single-hop beer!  And not only that, we used a hop which is quite rare and not often used, Millennium.  It's a reasonably new US hop which is used in dark beers over in America but not seen on our shores often, so when Jay suggested using it and Gazza found we could get some the project seemed a goer!

It's a high alpha bittering hop at 17.1% alpha acids (the stuff that gives beer it's bitterness, this is a very high figure) but we used 10kg in the copper and a further 5kg will be added to the tanks for dry-hopping.  We were pleasantly surprised with the almost Pacific character we got from the cones, with pineapple and tropical fruits coming off during the break-up.

So, although the beer doesn't have a name yet, "Millennium" is sat in FV2 about to commence primary fermentation and it should be an interesting one alright... look out for it in about 3 weeks' time when it gets casked up.
Posted by Gazza Prescott at 09:00 No comments:

Tap Takeover at the Fox E8

That's right, it's another first for us in the form of a "tap takeover".  On reading up about such things Gazza has come to the conclusion that they are like a meet the brewer except the brewer doesn't have to give speeches or anything else so energetic; sounds like we roll up, drink lots of beer and "press the flesh" as it were... we'll see if this is true next week!

Anyhow, we'd love to see everyone there so the details are as follows.. 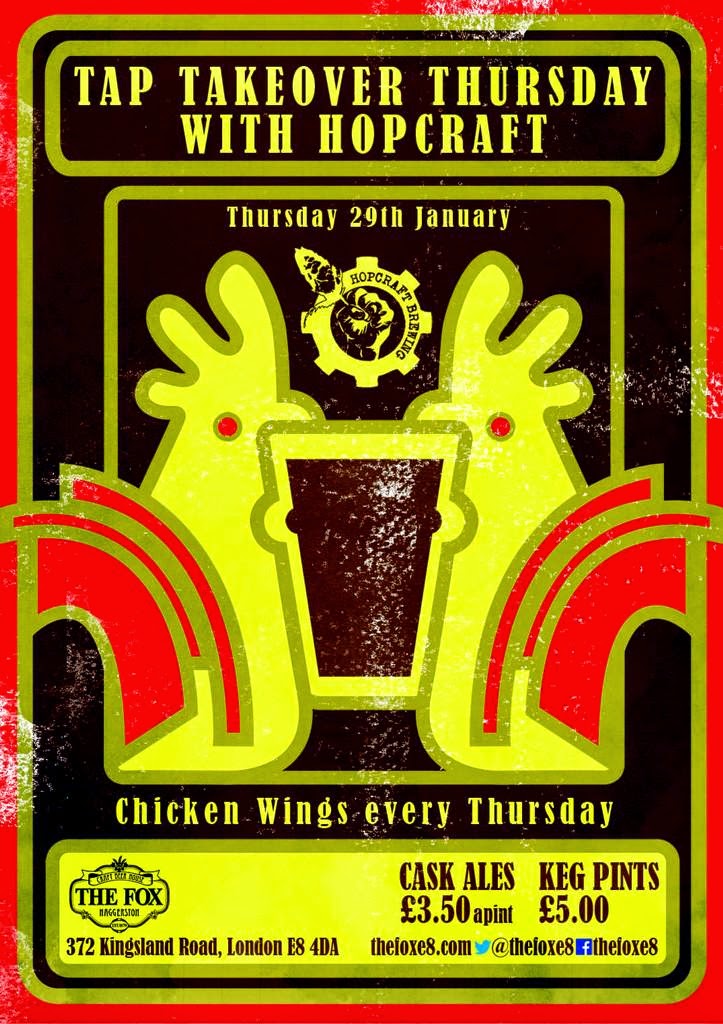 We should have at least 12 beers on, maybe more, during the evening plus Gazza and Jay will be there to berate or buy beer for accordingly.

The beer list will feature some (or all) of the following;
On Keg... 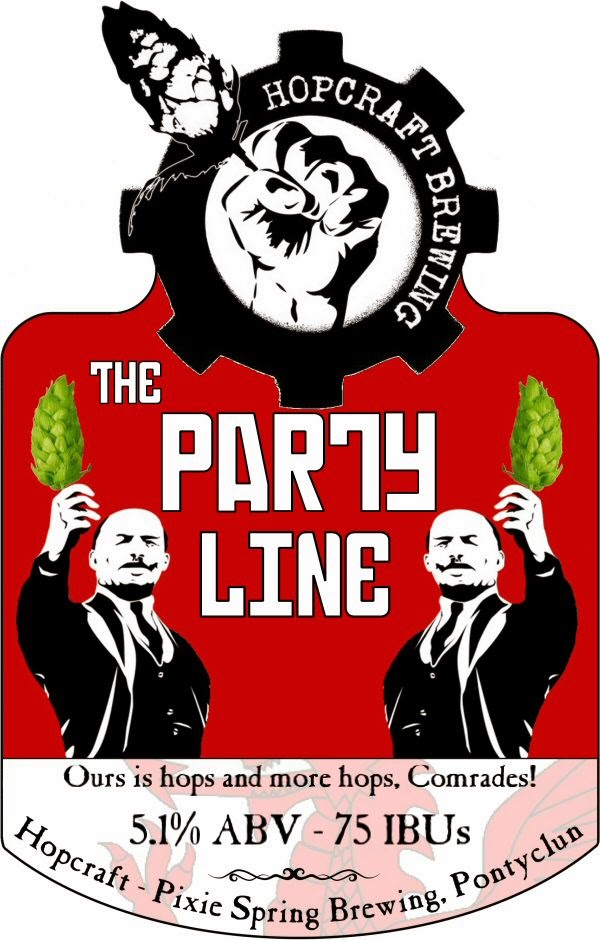 Twig of the Week!

We're obsessed with twigs, as are all craft brewers, so here's the latest contender fresh from a pack of American Cascade hops today... 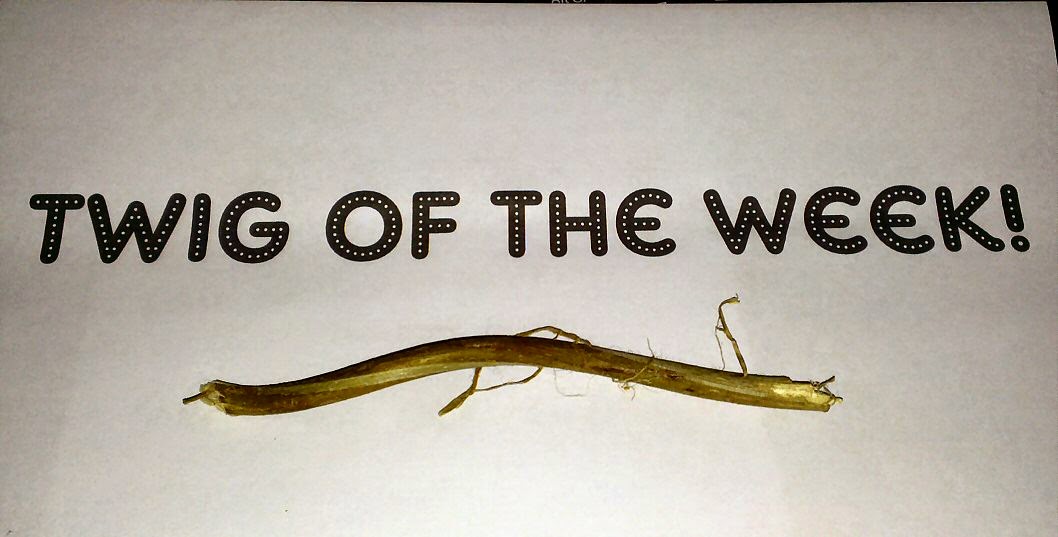 After a few test runs we finally bit the bullet today and bottled 3 9's of beer!

It's been a long time coming; regular readers of this gibberish will recall we bought the bottles and bottling kit back in March (or, if not March, then sometime a long way back!) but owing to various happenings, both planned and less so, it's taken us until now to actually bottle some beer on a semi-commercial scale...

We are now the proud owners of 340 bottles of beer which, after a few weeks of conditioning and the necessary quality controls, will be released into the wild... we  already have buyers for the majority of it and so may have to increase volumes next time we bottle; bear with us regards to supply and carbonation as we're still learning the ropes!

So, "Whole Pack Project #1 Citra", "Oceanic" and "A Good Rogering" are now in bottle and we can't wait to test them out in a few weeks' time...


Well, here's the big news that some already know...
Work began this week on our brewery tap in Cardiff. It's on the Kingsway, opposite the castle and close to the end of Queen Street, and is (for those who remember such things) the old Bogiez (and before that, Barfly) rock club. For those that don't know, it's a concrete cellar below what is now student accommodation, hence the name Hopbunker - it really is like a nuclear shelter down there! We'll be "decorating", if that's the right word, in an industrial fashion which should fit right in with the surroundings.
There are still a few things to be ironed out but we're 95% certain that everything will fall into place and we'll open sometime in February; obviously the plan is to open for the rugby at the beginning of the month... We have a star-studded team being assembled to run it with a very special boss-man who many will already know!
The plans are for UP TO (not necessarily all the time!) 12 cask and 20 keg beers with - obviously - the emphasis on Hopcraft and Pixie Spring beer accompanied by guest beers from far and wide. Our favourite Welsh brewing comrades will be featured prominently but we'll also have brews from all over the UK (sourced from my many contacts!) and there will hopefully be some meet the brewer events and suchlike to sample.
We'll be updating you with more info about this exciting project as soon as we have some, so finally I'll say we hope you can come visit us and sample our beers as an integral part of Cardiff's flourishing craft beer scene.
Cheers, Brothers and Sisters of Myrcene!

Posted by Gazza Prescott at 00:08 No comments:

To the drain I commit thee....

It's never nice to tip beer away, especially when you know how lovely it was, but we've had a few comments that the final tank of "Slave to the Wage" wasn't tasting quite right so we decided to investigate just what was going on.

It's one of the big batches we brewed late last year and the final tank sat on the dry hops too long through an oversight; normally this wouldn't matter, but Nelson Sauvin pellets seem to change from superbly fruity to overly grassy very quickly.  Add to this a hint of oxidation which has got into the tank somehow from, I'm guessing, not being flushed with CO2 well enough when it was filled up and you get beer which doesn't meet our exacting standards.

So, the remaining five 9's were today committed to the big drain in the sky.  Lessons have been learnt for sure, and I'm confident that it won't happen again - or, as sure as you can be when dealing with a live substance like beer!  I had a sniff of the casks as they were emptied and, whilst I'm sure many brewers would have sent them out without a qualm, I wasn't 100% happy with them so down the drain they went.

To put a positive glint on things this was only 10% of the total batch we brewed, we've learnt plenty about dry-hopping and CO2 flushing of CTs along the way and I'm happy to be preserving our reputation for quality beer rather than sending out second-rate beer. 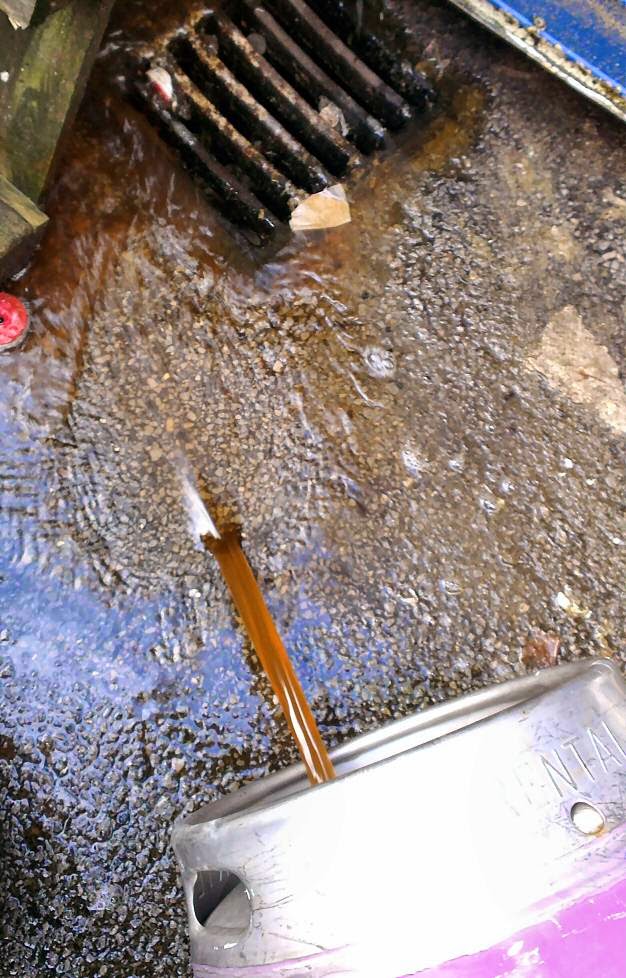 Posted by Gazza Prescott at 22:19 No comments:

New year, new ideas (and lots of old ones)

First off, happy new year from everyone at Hopcraft / Pixie Spring!

Now the pleasantries are out of the way I can run through a few of the things we're hoping to achieve this coming year...

There are plenty more things we're hoping to do, but that's enough for now...

Keep the faith, Brothers and Sisters of Myrcene!
Posted by Gazza Prescott at 00:12 No comments: