Well, after 4 and a half years of brewing, it's finally happened; we've reached some sort of maximum throughput at Hopcraft Towers!

We have 4 fermenting vessels, 2 of around 2500 litres and 2 of around 1800 litres (I say "about" as they are 40 years old ex-dairy tanks and we have no idea on their actual capacity except from experience of filling them with beer, so it's a bit vague) and 12 conditioning tanks of 680 litres each.  One "normal" brew fills 2 tanks whilst a "big" brew fills 3, with usually a bit left over for playing around with.

Thus far we've always had tanks free to move beer into from the fermenters because we've racked beer into cask/keg then cleaned the tanks ready to receive more.  The issue we're now having is that we have beer in the fermenters ready to transfer and are right on the limit of how many conditioning tanks we have free, which is admittedly a planning issue, but also dependent on things such as enough clean casks to fill up and enough hours in the week to actually do the racking of casks!

Until earlier this year we kept one of the tanks unused (for a number of reasons, principally it had a dodgy CO2 injector valve) but it became apparent that we needed all 12 in use and so completed a project to bring CT1 into service.  All well and good, but now we've come to the point where we have beer in the fermenter ready to move down into tank but no tanks available to receive it....

The "board of truth" shows that we have three beers in FV, two of which have been fined and are on chill (both are below 8°c now) but only two CTs available for filling, and those need caustic washing first (denoted by the red crosses).  Two tanks have been dry-hopped ready for racking this week (2 and 6), but this can't be done until Tuesday as the dry hops need time to infuse into the beer, and we're realising that we need to allow more time for this to happen so it can't be rushed!

Therefore, there's no option but to wait until Tuesday to transfer Idaho7.... this is a couple of days longer than I'd like, but sitting on chill won't do it any harm so no dramas!  However, it's nice to see that we're producing close to capacity, and it's also good to see where the pinch point is in our production process and that we need to increase our conditioning tanks in order to be able to throughput more beer.... 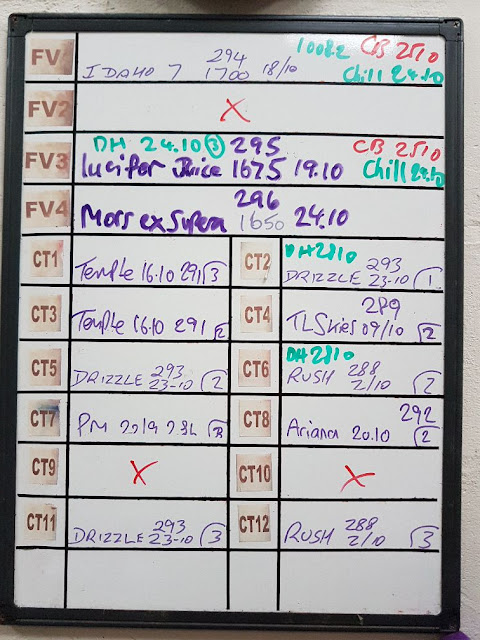 Posted by Gazza Prescott at 16:44 No comments:

The day had finally come... we were off mob-handed to Bucharest, the capital of Romania, to brew a beer with (IMO) the best brewery in the country!

Hop Hooligans are less than a year old but have already changed the face of beer in their home country with a steady stream of challenging, tasty and downright excellent beers flowing from their 800 litre shiny brewplant just south of the Bucharest city boundary, and the country now looks fair for a beer revolution along the same lines as the world-beating one currently underway in Poland.

Anyhow, how did we get to do this unlikely collab then? Well, Gazza tried a fair few of their beers earlier this year and he and Sue got talking to the guys who run the brewery, Cristian and Mircea, so it kind of all went from there!

We agreed to brew a strong chocolate orange stout and so over we went to Bucharest for 3 days of sightseeing, drinking beer and brewing.... can't be bad :)


Posted by Gazza Prescott at 15:10 No comments:

In with the cool kids, innit

Through a strange combination of circumstances we've ended up supplying a cask of beer to a house party hosted by Moose, drummer of local metal band Bullet for my Valentine.... just how cool is that?

How I think this happened is that Mate Spawn and Die was on in the superb Little Penybont micro-pub in Pencoed when it was sampled by a friend of the band, who recommended it to them as a suitable party beverage after they had been along to a local Bridgend brewery to sample the beers but rejected them as not fit for purpose!  Our star saleslass Sue then finalised the deal with the guys to make it all happen, but only after a scare when we thought the last of the casks had been sold, until it became clear we had one - just one - left in stock; relieved?

So, Gav was sent to set up and cellar the cask - on the drumkit packing case! - because

a) It's on his way home, and
b) he's by far the coolest of us with the tattoos and stuff

Gav was invited to the party but had to decline on account of being away brewing in Bucharest with Hop Hooligans, a great excuse if I ever heard one!

Looks like they had a good time with the beer, anyhow... 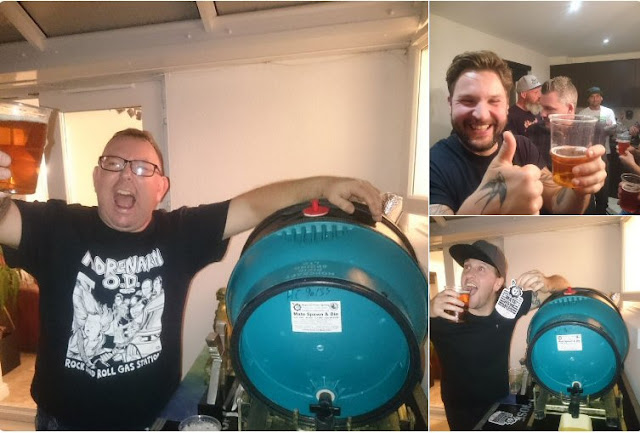 Posted by Gazza Prescott at 21:50 No comments: