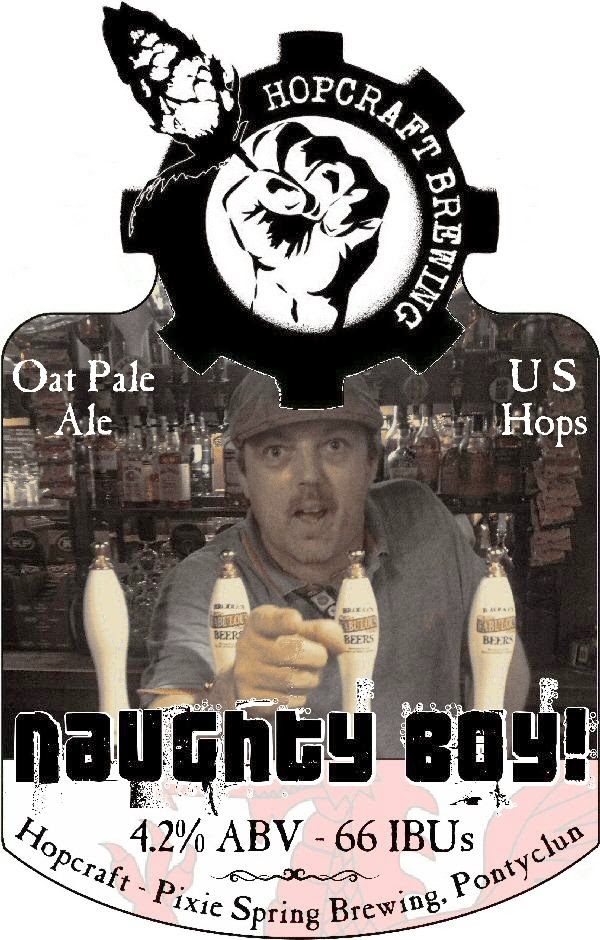 Posted by Gazza Prescott at 20:35 No comments:

Collaborations, or "collabs" as they're known by lazy people who can't be bothered to pronounce whole words, are all the rage at the moment in UK craft brewing. They began in the US when fellow brewers began to brew beers together and it's migrated, as with many things, over to our shores where we've put our own spin on it.

We meant to do loads of collabs with all the lovely brewers we know, but until now nothing has actually come off despite several tenuous plans... well, until last week that is!  We were joined by James Bendall of the soon-to-be-operational Axiom Brewing of Wrexham and John Winnerah of the lamented Art Brew of Dorset who closed the day after we brewed - for now.

One of the main ideas of a collab is that all collaborators have input on the recipe and so we all sat around the PC wondering what to do; Gazza and Tom had just driven back from Reading after a "meet the brewer" the previous evening and although we'd all talked about the brew on twitter and email a bit nothing had really been decided upon!  After some ideas bounced back and forwards we settled on a vague idea I'd put forwards the week before; a Belgian(ish) Black IPA which really is a bit of a strange beer to make but, hey, collaborations are all about pushing the boundaries!

The recipe was devised, the malts mashed in, dug, hops added, boiled, (lots) more hops added, wort cooled and finally stuck into FV4 with the yeast; sorted, and just enough time for some beers in Cardiff as a bonus!

So, massive thanks to James and John for their sociablilty and putting up with our shambolic setup and getting back late, the beer is now on chill (and at 5.8%) and tasting lovely; the whole sack of Special W malt (it's the German take on Belgian Special B malt) has given the beer a luscious fruitcake flavour to balance the hops and I'm very hopeful this will be an absolute cracker when it's finished in a week or two...

So, who's next then?

Posted by Gazza Prescott at 20:27 No comments:

.... cask of Hop Secret 4! I've been made as a special experiment using a new, untested and as yet unnamed British hop which is hoped can, after brewing trials such as this, make the British hop industry more competitive and, dare I say it, relevant in today's "big flavour" market; after all, we are in flavour country now!

I taste of honey malt, have a slight bitterness so as not to distract from the hop's flavour and aroma which is reminiscent of the soft, fruity New Zealand character; obviously it's not as in-yer-face as Nelson or suchlike, but it does have an intriguing tropical fruit to it and a citrussy, dry bitterness.

So, give me a go and see for yourself!  To do that you'll have to be at the Hopcraft "meet the brewer" event at the marvelous Nag's Head, Russell Street, Reading from 19:00 Wednesday where you can see Gazza, Tom and work your way through a dozen Hopcraft beers; go on, you know you want to...  see you there. 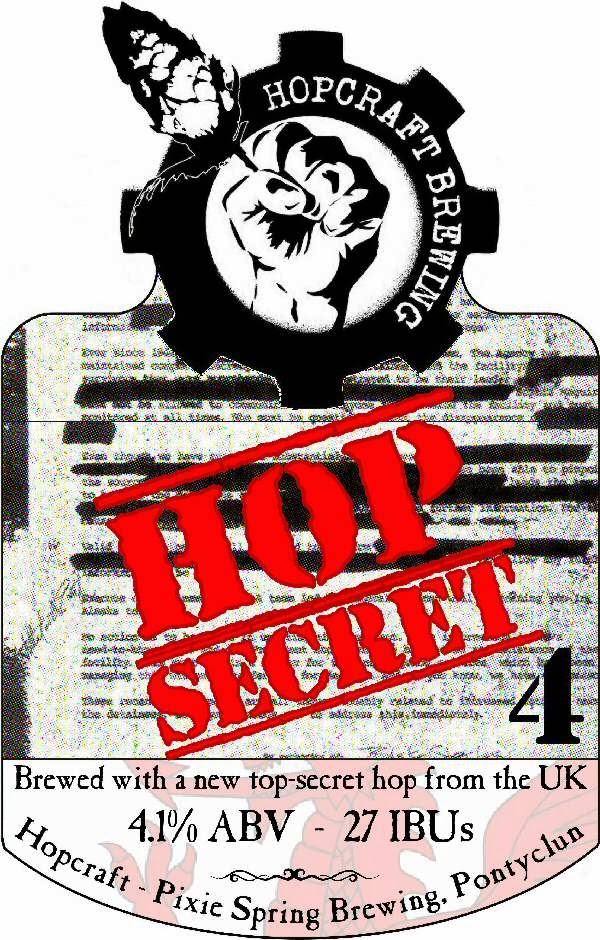 This week we have brewed a new pale session beer, "Chorister's Gold", which will be around 4.2% and hopped with Marynka (Poland), Admiral (UK) and Triskel (France) to give a soft, fruity beer ideal for a few pints.  This is a rework of an old Pixie Spring recipe which now bears little resemblance to the original!

Tomorrow we're crafting a new 4.5% or so golden brew with mainly south Pacific hops including Topaz (Australia) and Sticklebract (New Zealand); it doesn't have a name yet although "Cardboard box" is a possibility... or maybe not.

We're also transferring "Citraic" to conditioning tank and dry-hopping it, then casking up "Long Nines" and "Reign of Terroir" on Friday. 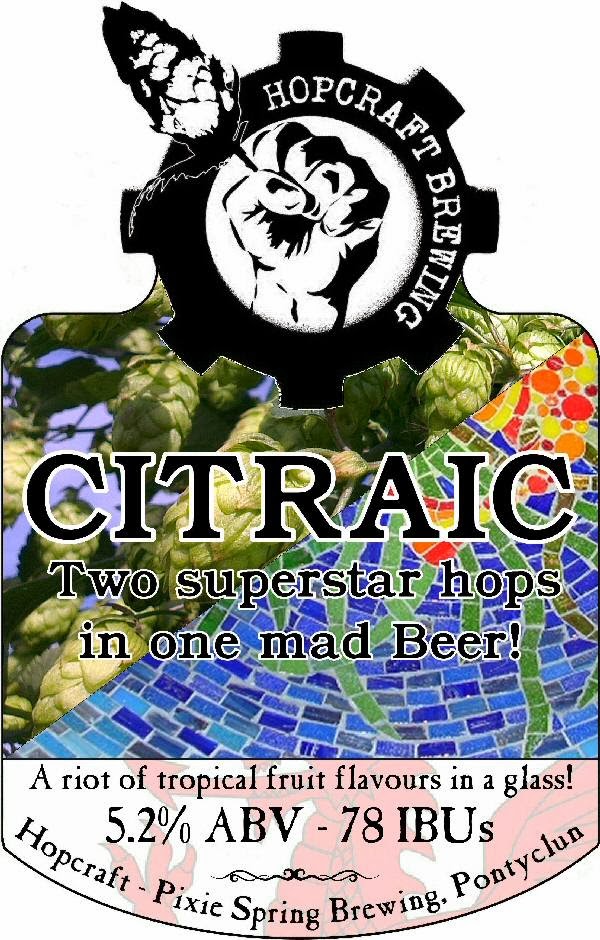 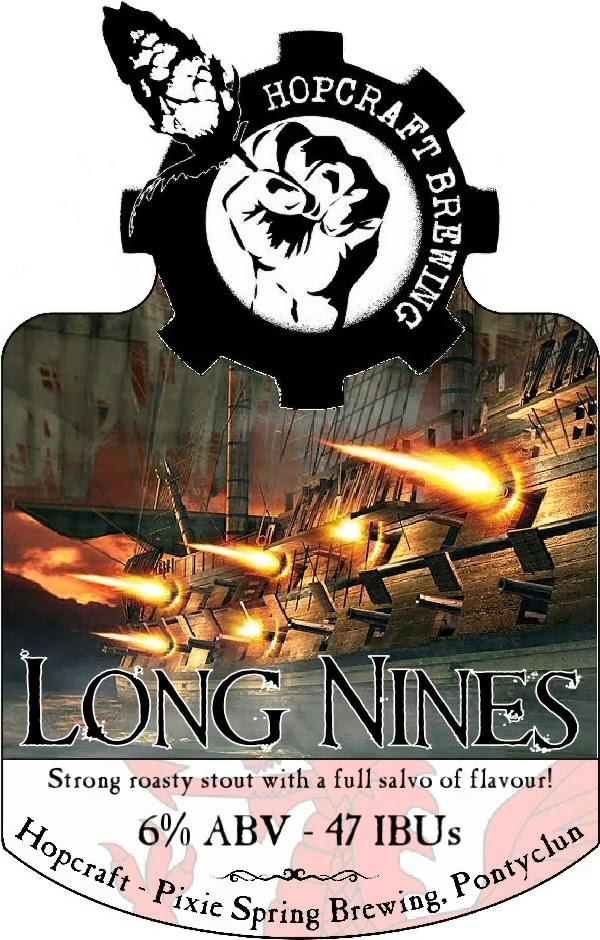 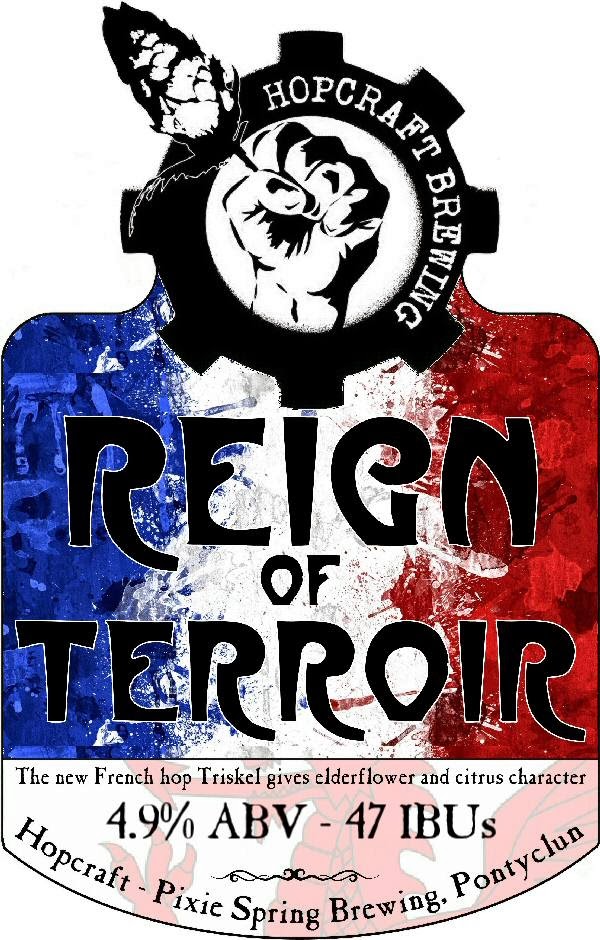 Posted by Gazza Prescott at 00:07 No comments:

The beer must get through...

We've just got back after a day driving in apocalyptical conditions with howling gales, floods, hail, driving rain and I'm sure I saw a few locusts too.

We started at our mates Brodies down in Leyton, east Laaardan, before a flying visit to Meantime brewery in Greenwich courtesy of more mates (AB stainless who were working there) then drops at the Southampton Arms, Highgate, Nag's Head, Reading and finally the Shoulder of Mutton, Wantage before hitting the M4 back to Wales.

We're brewing another new beer tomorrow with South Pacific hops including Topaz and Sticklebract, as well as transferring "Citraic" (which is smelling lush by the way) to conditioning tanks with a load of dry-hop pellets, then we'll be casking up "Long Nines" and "Reign of Terroir" on Friday as some are due out next week!

Don't forget we're at the lovely Nag's Head in Reading next Wednesday 19th for a "meet the brewer" evening; there will be at least a dozen beers on sale including some special one-off beers just for the event; see you all there, it'll be good!  The beers will start coming on during the day and we'll be there from around 6 to talk about the beers, the brewery and answering any questions...

The tenuous beer list is thus...
Plus maybe a few more bits and bobs.....

Posted by Gazza Prescott at 00:00 No comments:

This week we've got a fair bit on; brewing twice - probably Chorister's Gold and a mid-4% hoppy amber beer maybe with Topaz and Sticklebract - plus delivering more beer to London, Wantage and Reading in preparation for our "Meet the Brewer" at the Nag's Head, Reading.

This event happens next week on Wednesday 19th; be there, it'll be fun!  We are presenting a dozen of our beers, including a few that won't be seen anywhere else, with the list looking something along these lines...

Plus two more we've not decided on yet!  We'll be talking about the brewery and why we decided to get paid sod-all for working hundreds of hours a week, plus there will be a Q&A session.  I'm not sure what time this kicks off but I'm assuming not before 19:00 or so...  the Nag's is a superb pub and it's close to Reading station, literally not more than 10 minutes' walk.

See you all next week, in the meantime we'd better get brewing some more beer!!
Posted by Gazza Prescott at 21:15 No comments:

Not massively more than usual, but as we're off to London Thursday we have effectively lost a whole day so we're squeezing everything into three, plus there's some extra stuff happening too!


Tomorrow we'll mainly be...
And then Thursday, before we leave for London, we'll be casking up "Sucker Punch" and maybe "Bang Tidy edition 3" too...

It's all go here, which is great!

Posted by Gazza Prescott at 22:43 No comments: