.... "Graveyard Eyes", a modern porter hopped with some lovely American hops and finished off in the conditioning tank with Sorachi Ace, the mad hop originally from Japan, which imparts flavours of coconut, orange peel and dill and works a treat with chocolatey porters!

Later this week we're also going to be casking up Tidy Bitter v2 and transferring "You Love Us" to the conditioning tanks with a generous dose of Amarillo dry hops, and inbetween that sending pallets out and delivering a full vanload to London! 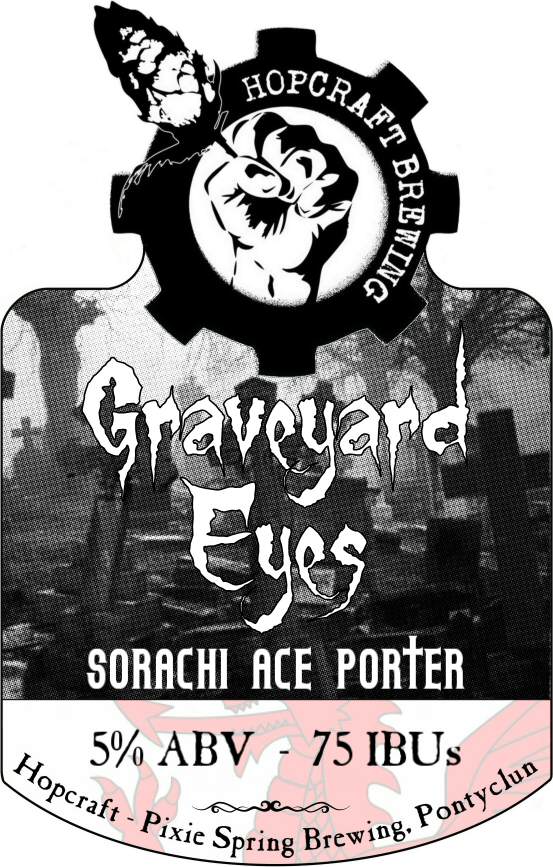 Posted by Gazza Prescott at 22:20 No comments:

We've actually brewed twice this week in what seems to be a futile effort to keep up with demand for our beers; first off was Tidy Bitter version 2 (very slightly tweaked) and today saw the turn of "You Love Us", a massively hopped golden brew with buckets of luscious American hops being piled in with Columbus, Citra, Chinook, Centennial and Cluster all making appearances.

Speaking of appearances, Gethin from the excellent Coach pub in Bridgend was here to help and learn some brewing lore, although whether we passed any on is debatable!

Next week sees pallets going around the country and us heading off along the M4 on another jolly to London where we'll deliver another vanload of beer to thirsty customers all across the city... and maybe try a few ourselves whilst we're at the superb King William 4th which, as any fule kno, is the home of Brodie's beers out in Leyton; proper east end that is.

Next week also sees us brewing another dark beer, this time it's the turn of "Graveyard Eyes", a modern take on porter brewed with German, New Zealand and American hops, but it's the totally bizarre Sorachi Ace hop which should steal the show with it's character of coconut, dill and orange peel... honestly, it has!


Posted by Gazza Prescott at 23:12 No comments:

Some photos from the "meet the brewer(s)" last week.

Our "meet the brewer(s)" at the City Arms, Cardiff last week was a big success; all 8 beers went down well and we had plenty of good feedback - cheers everyone!

Some photos from the event are below...


Posted by Gazza Prescott at 16:13 No comments:

Yes, that's right, we're doing our first ever "Meet the Brewer" event tomorrow in Cardiff at the City Arms!

These events are getting very popular in the UK now; they originated in the US where brewers are much more in touch with their customers than they are (or were) over here and, in our opinion, are a great way of connecting with the actual people who drink our beer, let them know what's going on and then receive some (hopefully positive!) feedback... we then come away with a greater understanding of what we need to do and what beers we need to brew.

Anyhow, it's at 20:00 Wednesday 14th August at the City Arms on Quay Street, just off Westgate Street in Cardiff.  We'll hopefully have the following beers available for your delectation;

The cupboard was bare...

Well, not quite, but our coldstore is looking distinctly sparse at the moment!

Basically we sold a lot more beer than we thought in the last two weeks and so we're playing catchup now; Darwin's Paradox and Redneck are going into cask tomorrow and we're brewing twice this week in an attempt to have a decent range available again...

I'm not complaining about selling all the beer, honest guv, but we've been taken a little by surprise by the demand for our beers...  cheers everyone, hope you enjoy them.

Mosaic "plus" in the FV and more deliveries....

Today saw the new and improved version of our second brew, Mosaic, which has been made better (more "Awesome" to use beer blogger gibberish if you will) by the addition of loads more hops at flame-off!  Whilst the original utilised only Dr Rudi, the new one uses those plus a big dose of gorgeously fruity Mosaic which, hopefully, will give the beer a much more robust flavour and, to help this, bitterness has also been slightly boosted to 80 IBU from the previous 70.

Tomorrow is yet another delivery run to the Alehouse and Nag's Head, Reading, White Horse at Hedgerley, Egham USC beer festival, the Shoulder of Mutton at Wantage and finally the Cornubia in Bristol.

So, with a second brew this week to boost flagging stocks (Fleur d'Alsace, made with the new French Triskel hop) and a rebrew of Tidy next week, things are increasingly busy!

Posted by Gazza Prescott at 00:17 No comments:

Well delivering in London was fun!!!  Actually it was, although some of the deliveries were - let us say - challenging, the Euston Tap springs to mind....  anyhow, all the casks were successfully delivered to their correct place and now we're in process of organising the next lot of deliveries!

Gazza is off with a vanload of beer to Derbyshire and Sheffield tomorrow when beer will be delivered to the Old Oak Horsley Woodhouse, Hunter's Arms Kilburn, Thorn Tree Waingroves, Raw brewery, Shakespeare Sheffield and finally the Rutland Arms which, obviously, is also in Sheffield.

Next week we've got an additional run along the M4 with casks going to the lovely Shoulder of Mutton, Wantage, Nag's Head Reading, Egham United Services Club and also maybe the Alehouse Reading and White Horse at Hedgerley...

And we also need to find time to brew some more beer!  Not complaining, honest...


Posted by Gazza Prescott at 23:33 No comments: