Stay out of the sea, keep the water clean...

Today we brewed yet another of Gazza's little projects, our long-awaited summer beer which, if we're honest, will  probably have missed the summer by the time it comes out in a few weeks!

Half Maris Otter and half German Pils malt, this is a super-pale brew hopped with bracts from the two "great" surfing regions, America's West Coast and Australia in the form of fruity Amarillo, uber-citrussy Centennial and "pineapple chunks" Galaxy; Newquay isn't included as there are, as far as I know, no hop farms there and anyhow we don't use British hops except in very rare circumstances.

Extra-pale, dry, citrussy and refreshing, this is the beer for the summer which just ended so please drink it up as we'll be stuck with it otherwise and have to drink it ourselves... which would be just terrible.  Honestly.

The name comes from punk band "Eastfield" and the track includes the lyrics below which, having a dislike of the whole macho surfing scene, Gazza wishes he'd written had he any discernible songwriting ability.

Beach life isn't cheap, it'll cost you an arm and a leg
In trendy clothes shops and in the open water
Tear down the blue flag and hoist up the black flag
To lead the surfers out to the slaughter 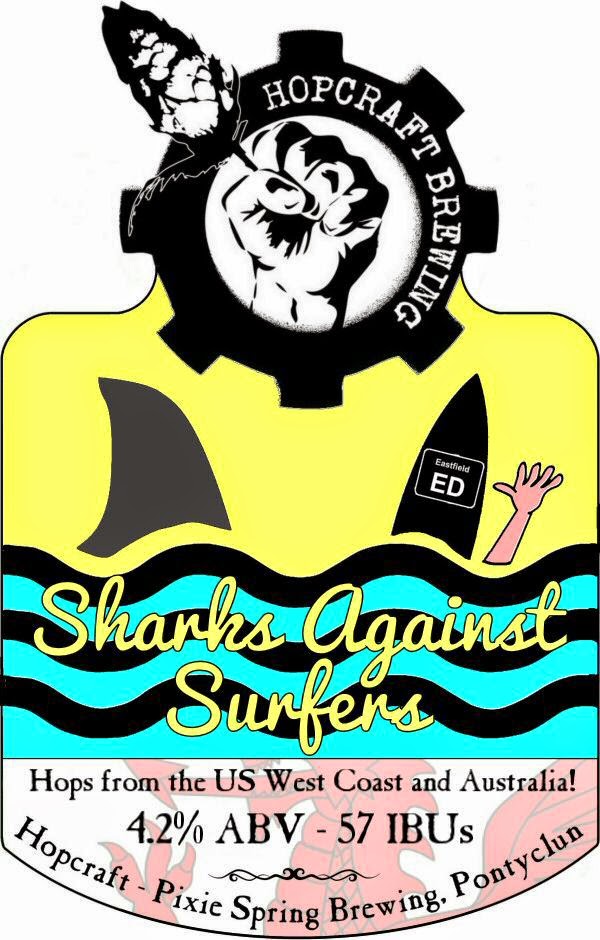 Posted by Gazza Prescott at 22:10 No comments: 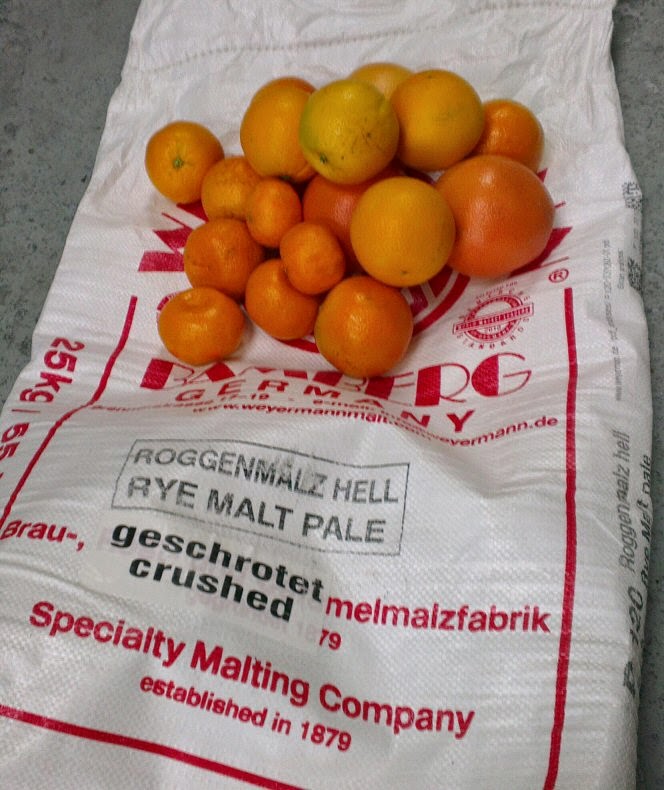 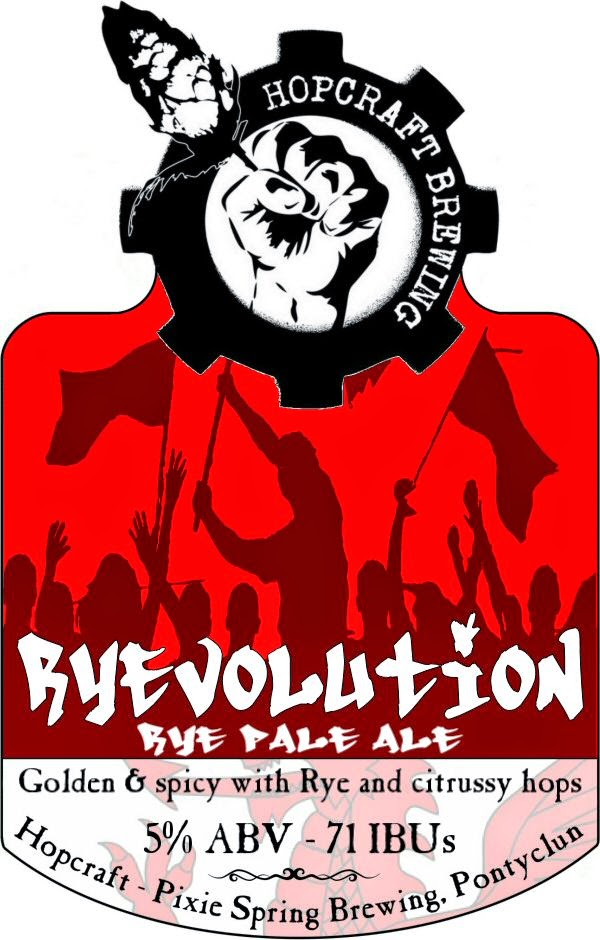 Posted by Gazza Prescott at 21:23 No comments:

That sums up this week nicely.

We're brewing tomorrow, casking up beers on Thursday and then Gazza is off to the Brum Beer Bash on Friday and Saturday.  This is one of these new-style festivals where the beer list reads like a who's who of the cutting edge brewers, but more importantly - and this is why these festivals are so much better than CAMRA run ones - both keg and cask beer is on sale with no stupid ideological browbeating going on; if the beer is good then it's on sale no matter what dispense method!

Plus there's food but, this being a new-wave festival, it's called "street food" which means it's twice the price for the same thing in a cardboard tray.  Nice though....

And then there's the customer demographic which CAMRA would give their right arm for... beautiful (well, some of them are) young things drinking beer, talking about beer, not caring whether it's cask or keg....

If you're there come find me, I'll be around somewhere; I'm theoretically working but my definition of working and most peoples isn't generally a close match!

Posted by Gazza Prescott at 20:51 No comments:

We can't really afford em, but you can't sell beer without it being in a barrel and ecasks cost a bit too much (£6.40+vat) to use too many.... so, meet the first vanload (50) of our latest batch of Brewery Plastics casks!

These turquoise lovelies should mean we can get more beer into cask and therefore sell more; we've been really struggling for empties recently and this 100 should ease the shortage although, in reality, we really need another 200 at least and, at £31 each, they're not cheap (although half the price of steel casks).  Still, these should help ease the precarious cask situation immeasurably.

We also have 6 pins which, despite being the same price as the 9's, are pretty much essential as some pubs like stronger beers to be in them plus we can cask up any "bin-ends" and either blend them or sell them as a pin to whoever wants one!  They're also useful for testing out ideas such as pellet dry-hopping or other such bizarre ideas...

Is what I've been doing today.  Paperwork in the form of invoicing, orders, stock control, that kind of thing, although I've still yet to manage to type in the backlog of cask numbers and where they've gone... !

Planning has consisted of trying to plan some beers for the month ahead; so far, provisionally at least, we have a Rye beer, one with all the hops added at the same point in the boil, a re-run of an old favourite "Napoleon Complex" plus some more which are still on the drawing board.

This week we only brewed once, but it should be a pretty damn good one going on the smells drifting out of the fermenter where it's just begin it's fermentation.... 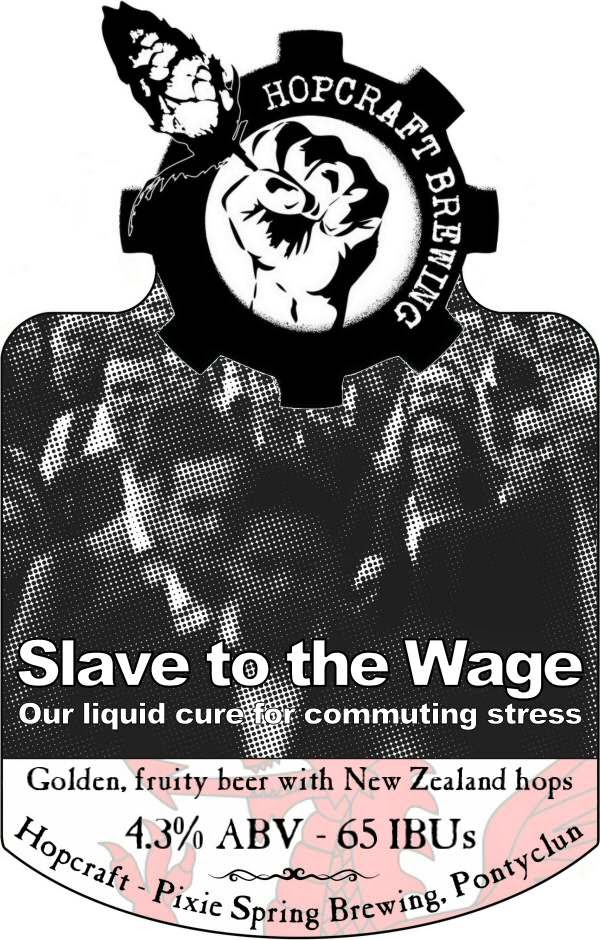 Next week should see the brewing of "Nelson Plus" which, as you'd expect, is full of lovely winey, fruity, tropical Nelson Sauvin in both the copper and dry-hop; can't wait for that one!

Posted by Gazza Prescott at 14:03 No comments:

This week we are mostly...

... sending out and delivering beer, brewing "Slave to the Wage" and a million and one other things which most people think just magically happen (or wouldn't even think exist) but still take time; for example changing Peracetic in the CIP tanks, printing cask labels, taking gravity readings on beer in the FVs, writing recipes, working out what ingredients we'll need to brew for the next few weeks, emailing/contacting customers selling beer, updating the sales sheet.... and so on.  You get the idea.

Here's a pallet which I assembled today and has departed to London on the overnight Pallex run; all lovingly wrapped, strapped and sealed, only now do I see I've got the bottom cask pointing the wrong way with the shive (round white thing, nearest cask on bottom row) pointing outwards!  This is bad for 2 reasons, 1 if it blows out then it might hit someone/something and 2 if it's knocked it might also blow out, so I'm hoping it gets there in one piece. 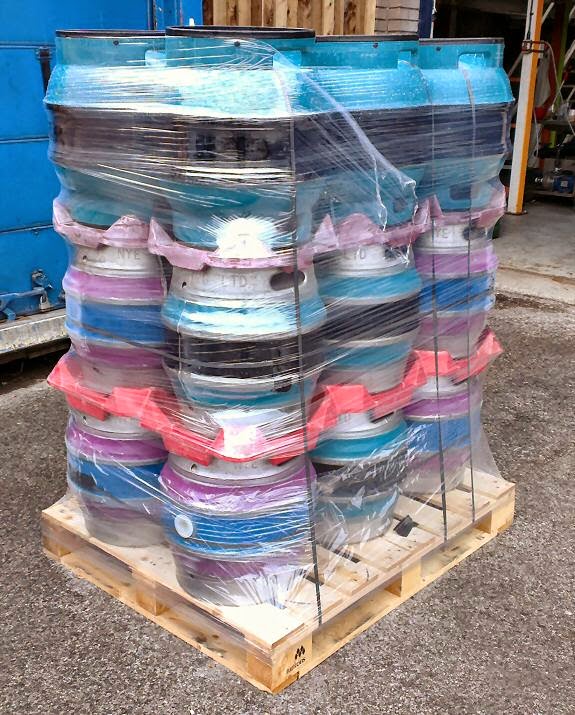 Posted by Gazza Prescott at 22:09 No comments: 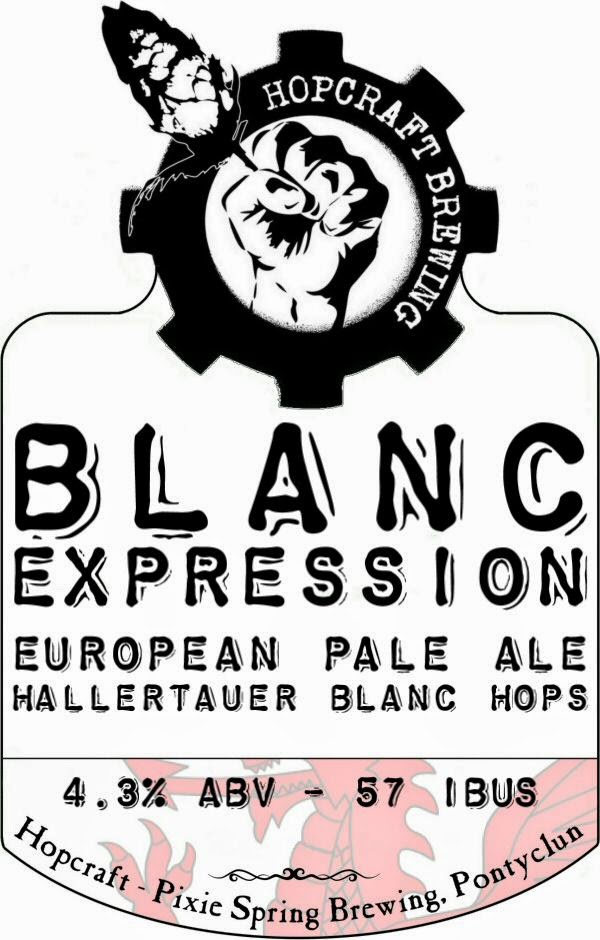 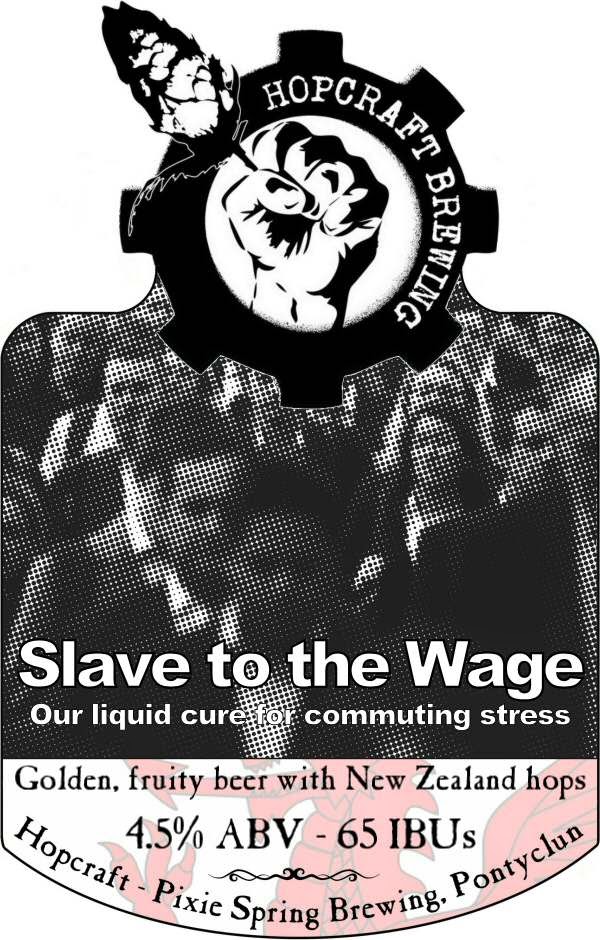 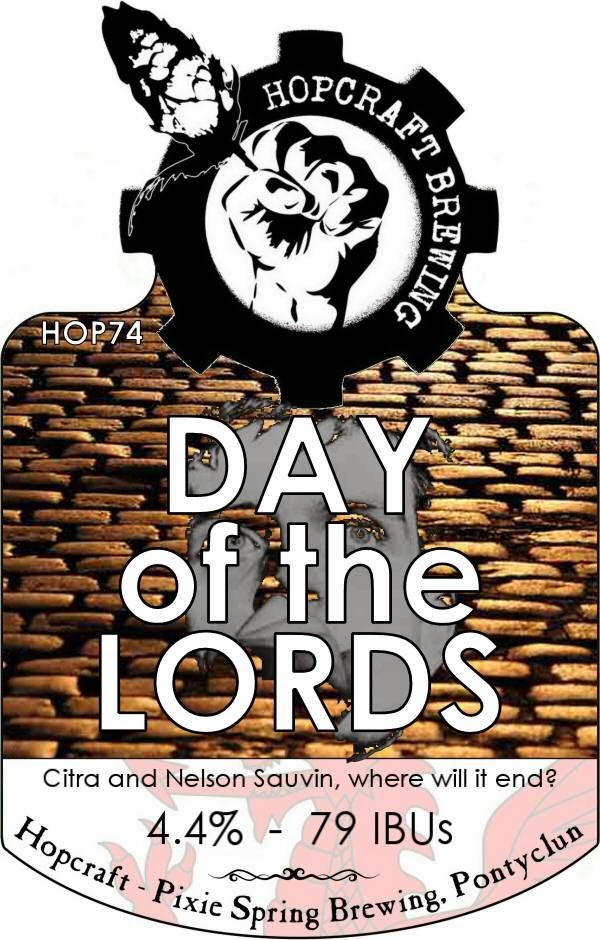 Posted by Gazza Prescott at 12:21 No comments:

Honestly, that's what the mix of Centennial and Mosaic hops smells like, peobably the fruitiest thing in human history!!

We're brewing Mosaic Plus, today is a good day.... 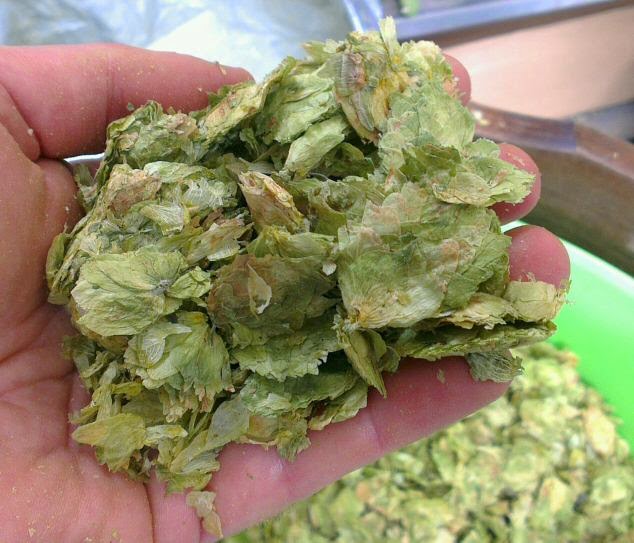 Posted by Gazza Prescott at 14:02 No comments:

Why the French, you may ask?  Well, not a lot of people know that the French have a growing micro-brewing scene with hundreds of brewers producing an increasingly interesting range of beers.  It follows, then, that these brewers will need hops and therein lies (or lay) the problem; until recently French hops meant Strisselspalt and... erm... that was about it.

Strisselspalt is a lager hop and has many of the flavours you'd expect of something used by the big brewers - a gentle grassiness with not a lot else.  Now the new brewers in France wanted something more and it took the decision by a multinational brewer to stop buying Strisselspalt to kick the French hop growers up the arse (in true Bishop Brennan style) into producing some new varieties which were concocted with the help of esteemed UK hop scientist Peter Darby.  Several new varieties have appeared with Bouclier, Aramis and Triskel being the most promising.

We like Triskel.  It's understated but has enough citrus and evergreen character to make it interesting and, combined with Cascade and Centennial, it really shows it's colours.  "Reign of Terroir" is brewed with these three hops to give a golden ale full of citrus character but with an additional bit of French attitude...

This new version will be weaker than the original but has more hops so it's not all bad, plus we've tweaked the hop additions too which should give more flavour. 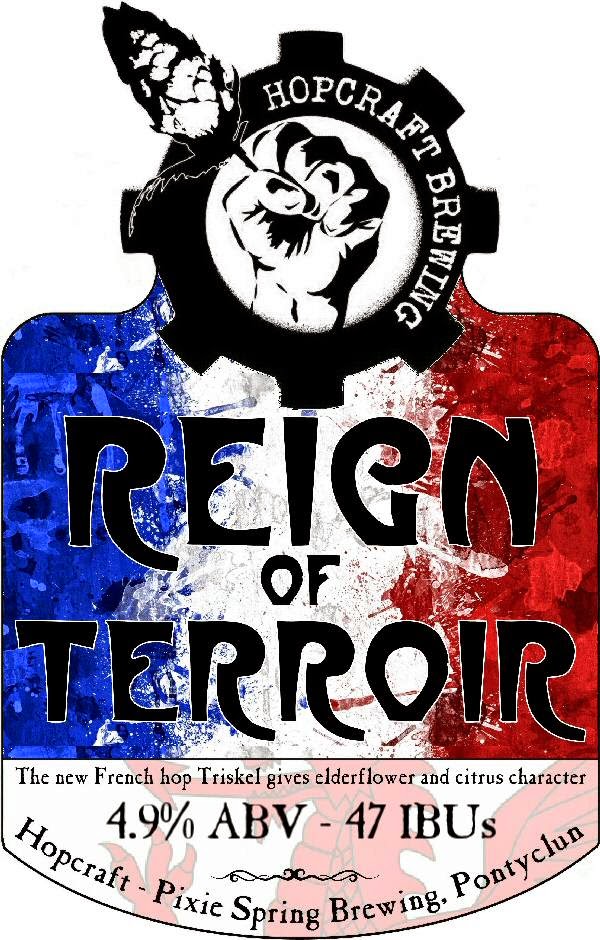