"Why bring politics into beer?"

So said one bloke - presumably a Tory - at my recent meet the brewer when I proffered my opinion I was glad Thatcher was dead....  well, IMO politics is, or SHOULD, be in everything we do and say.  I know there are those who have no opinions and simply spout what the papers tell them, or just don't care about politics (look where apathy got in 1930's Germany...) but I disagree; the effects of the stupid decisions of politicians matter to everyone and if you're not informed, with an opinion, then you may as well bend over and take whatever is coming your way, and I guarantee it won't be a box of chocolates.

Anyhow, in this vein, we have brewed a beer with local newcomers Twt Lol (in Welsh this means, vaguely, "little joke") and, in a departure from Phil's normal traditional beers, we've cooked up a hoppy amber ale with the luscious US Mosaic and Chinook hops.  The pumpclip features a photo of the nearby Port Talbot steelworks in South Wales, currently threatened with closure due to Tory inaction, and it really does feel like a case of the last stand for UK industry down here....

So, to all those involved in the fight to keep a UK steel production capability, we dedicate this hoppy amber IPA and may steel not go the same way as coal... although I'd not hold my breath with a Tory government in charge.

See, politics is in everything. 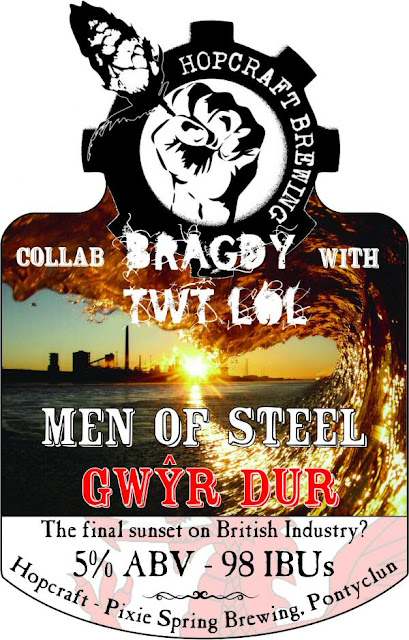 Posted by Gazza Prescott at 14:48 No comments:

Despite rumours to the contrary, we always try to have a dark beer on sale at all times as

a) people like them
b) they round out our range
c) they stop people taking the piss that we only brew pale hoppy beer
d) they smell really nice when you're brewing them, and
e) we actually like them!

So, with our current offering "Aur Du" (Black Gold, an oatmeal stout) down to single figures in the coldstore, we decided it was time to brew up a replacement... but what?

We thought about another coffee porter but don't want to get typecast (again!) by always brewing coffee beers, so went instead for a porter/stout concoction hopped mainly with the totally bizarre Sorachi Ace hop, one of Gazza's favourites but one that is notoriously difficult to use as it takes over everything else, plus it doesn't taste right in 95% of the pale beers it's used in (says Gazza).

Sorachi Ace is a fascinating little critter; originally developed by Sapporo in Japan (along with it's now extinct sibling Furano Ace) but now grown on the west coast of the USA and, even more interesting, it's flavour continues to develop; years back it was all lemon sorbet, then it morphed into dill and herbs, whereas now the dill is still there but a most bizarre coconut/gorse bush character is coming to the fore and it's bloody gorgeous!

We already have a Sorachi porter, "Graveyard Eyes", but this new brew is a very different animal with all the other hops cut out (except one!), a lower ABV and a very different malt makeup so we'll be very interested to see how it comes out in a few weeks time.... 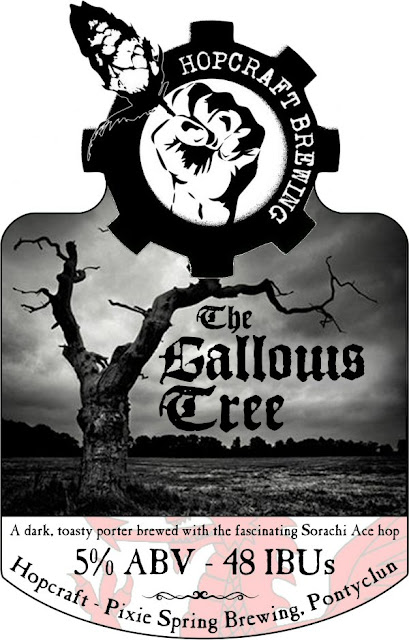 Posted by Gazza Prescott at 14:38 No comments:

When we brew big batches (12 barrels, 2300 litres) of "Temple of Love" or "Golden Pixie", and occasionally other beers we generally sell 2 of the 3 tanks as the mother beer - i.e. what it's actually called - and the final tank we have a play around with by dry-hopping with either a single hop or mixture of hops we don't normally utilise for this beer, just to see what we can come up with!  These are called "third tank" beers.

Well, we've done it again with the last brew of Temple, so thanks to the magic of dry-hopping will you welcome "Citracana"!  The name is a simple mash-together of the two hops used for dry-hopping; Citra, the mangoey, sweet fruity darling of many a brewer (and consequently difficult to get hold of...) plus Olicana, one of the new UK hops from the Faram's breeding programme, which has the usual European grassy character with some additional soft fruits.

On initial tastings these two hops seem to have come up with something pretty special indeed!  The base beer gives a strong bitterness and oily hoppiness, but the aroma and top-notes of the flavour are all tropical fruit and sweetness; to say Gazza is happy with it might be an understatement, but the bad news is that of the 14 casks and 2 kegs, within 2 hours of filling them we are all but sold out...

So, if you manage to defy the odds and find some "Citracana", let us know what you think! 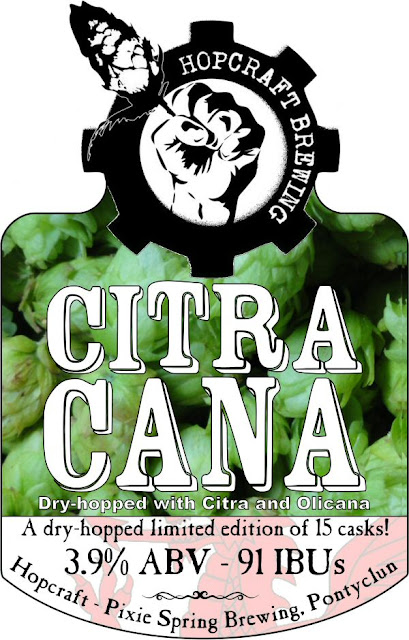 Posted by Gazza Prescott at 00:44 No comments:

Brewers are modern-day alchemists (well, some are...) turning this 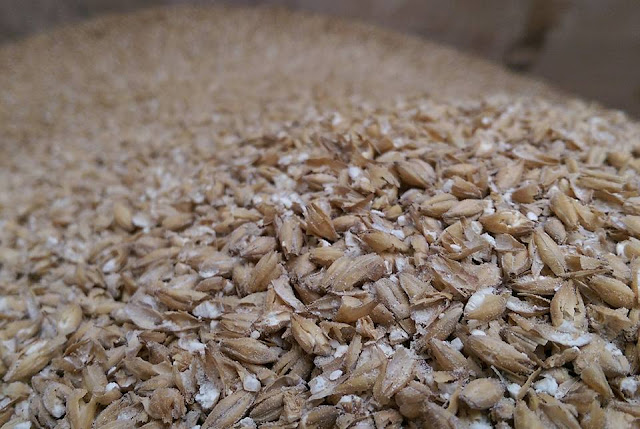 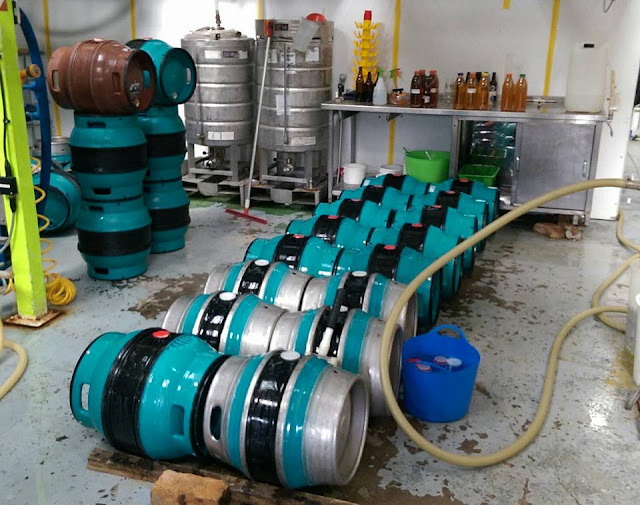 Posted by Gazza Prescott at 11:14 No comments:

That's right, owing to sales far exceeding expectations recently we've got to brew twice this week to keep the tanks topped up!

First up will be "Golden Pixie" as we've totally sold out and as it's one of the supposed regular beers at Hopbunker we thought we'd best brew some more!  Second will be the return of an old favourite in the form of "Slave to the Wage", a New Zealand-hopped brew with a subtle balance between malt and the fruity hops; this is always a good seller when we make it so get your orders in now ;)

Next week we're still considering what to brew, although it may just be something very hoppy yet again.... we'll see. 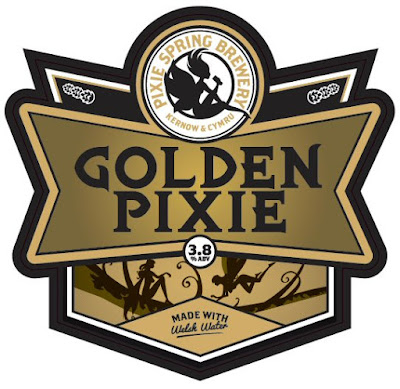 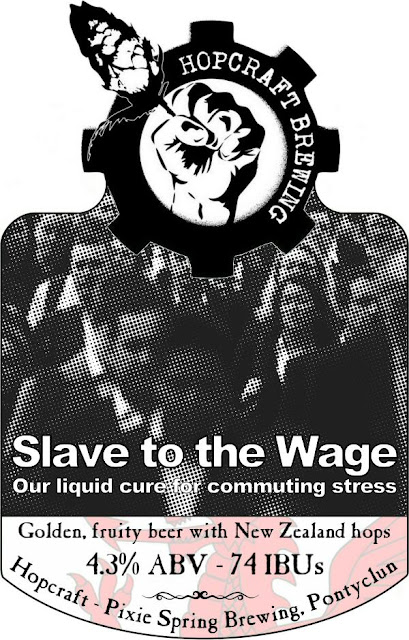 Posted by Gazza Prescott at 20:08 No comments:

Owing to Gav being away we're not brewing this week, but hopefully we'll get lots of things sorted out and in order to get straight back into it again next week!  Sales have been crazy this week and, as a result, we have almost zero stock so need to get brewing and refill the tanks to replenish our supplies...

Next week we'll be brewing a big batch of Golden Pixie (as the last one has already sold out) plus another brew, hopefully - if the hops are available - the return of one of Gazza's favourites.  We'll also have to brew Citra+ again as the whole lot (bar a couple of casks) has been sold already, and some isn't even in the barrels yet!

Our collab with Twt Lol is currently on chill and tasting lovely (plus it's being dry-hopped with Mosaic which will make it indescribably lovelier), it doesn't have a name yet but we're working on that!  No rush....

A tonne of malt is on it's way so we'd best get planning some beers!
Posted by Gazza Prescott at 10:58 No comments:

The UK hop beer now has a name!

If you know of the band Killing Joke you'll recognise the picture.... if not, then this beer is named as a joke against us in that we are well known for our vociferous opposition to British hops as they just don't taste of enough for us.  All well and good, but this brew has been made with over 90% UK hops in the form of the superstar of the new UK hop varieties, Jester, which is very un-British in it's character!

Think rhubarb, gooseberry, squishy tropical fruits and a soft bitterness and you'll have a fair grasp of what this tastes like!  Jester present very much like a New Zealand hop in that they have a soft, tropical fruity character, and we're dry hopping with a dose of another new UK hop, Olicana, which we've not used before but promises peachy aromas... hopefully it'll deliver on that to give us a new UK classic! 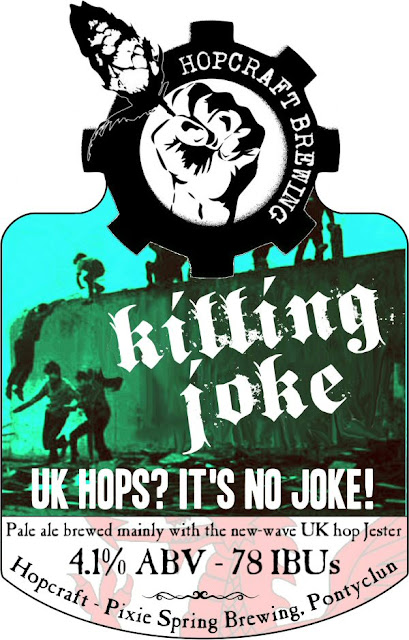 This week, with Gav away on holiday, things are a bit quieter than normal at Hopcraft Towers but Gazza is still washing casks, filling them up, and all the other assorted things which running a brewery involves doing, all the messy, time consuming things which most people don't know about!

But, amongst all the other stuff, we need to brew some beer so Gazza will be hosting Phil from new local brewer Twt Lol in Treforest; Phil is known for his traditional beer, some of which use local hops, but this time we'll be cooking up a Red IPA with Mosaic and Chinook hops in the copper which most definitely aren't traditional!  The return collaboration in Treforest will be a pale ale using the New Zealand hops Green Bullet and Waimea, sometime in May.

There's no name for this beer as yet, and not even a definitive recipe until Wednesday morning, but everything will be alright on the day I'm sure of it.... the malt, hops and yeast are here so whatever happens we'll make something tasty!
Posted by Gazza Prescott at 00:20 No comments: