These two generate a lot of the requests we receive (although Citra plus is our most requested brew) for re-brewing old recipes, and as we love them both it seemed rude not to give them - to use modern contemporary dialogue - a "reboot"....

So, here we have "Mate Spawn and Die", named after a Lard track, which is hopped with the gloriously characterful New Zealand hops Waimea and Green Bullet, then dry-hopped with sticky, juicy, almost liquoricey Vic Secret.... New Zealand-licious!

Next up is "New Dawn Fades", obviously a Joy Division track, with the exquisite combination of tropical fruity Citra and orchard fruity Calypso.... oh yes, it's a belter is this one!  Originally brewed at Steel City in Sheffield back in summer 2012, it was re-brewed at Pontyclun in 2013, again in November 2015, and now it's back with a slightly amended - read improved - hopping regime!

So, in a rare case of no new beers this week, we give you two of our most requested brews; enjoy! 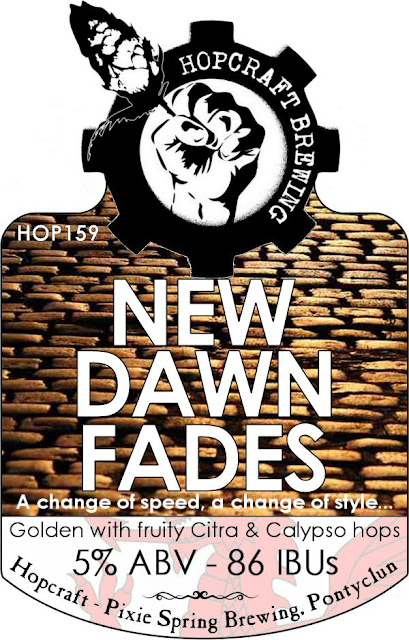 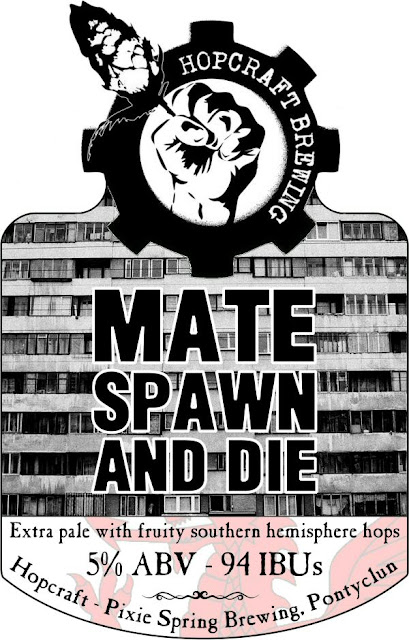 Testing a new "base" malt

Yep, a new base malt!

For those who don't speak brewing lingo, base malt makes up the majority of the beer's "grist" of grains which contain the sugars needed to make beer.  It's barley (usually grown in East Anglia) which is wet then heated gently to con the grains into thinking the season has changed and it's time to start germinating.  Malting is an extremely complicated procedure which is outside the scope of this blog (and my knowledge!) but this should tell you all you need to know should you wish!

Our beers are generally of a simple malt recipe with 90-95% being "base" malt, then 3% wheat malt (for head retention) and 3% of either Carapils or Melanoidin (for body and mouthfeel).  Some beers have other additions, such as stouts and porters with up to 20% roasted grain, but in the main it's 90%+ base pale malt.

We originally used Munton's Maris Otter blend malt, but after using it for a while decided the extra cost (around £150-200 a tonne on top of the usual £500 or so price) of Maris Otter just wasn't worth it for our beer; Maris provides a more "full" malty taste with, at it's best, a luscious honey character, but with our beers being hop-led we don't need the malt character so moved onto Crisp best ale malt.  This unfortunately has an even more pronounced flavour so that was soon jettisoned in favour of Munton's Propino and Super Pale, bought on tonne pallets direct from East Anglia, and we've stuck with them until now as the malt is pretty consistent, works well with our set-up and provides a good to great extract power (the amount of sugar produced per kilo of malt).

We were recently visited by a rep who offered half a tonne of Baird's Propino for evaluation purposes, and so - ever ones for a freebie - have gone with it to test out it's suitability for use in the brewery.  Now I've heard lots of stories, most bad, about Baird's malt but will resist any temptation to jump to conclusions and we'll be using it as a direct replacement for our usual Munton's Propino and we'll see how it stacks up! 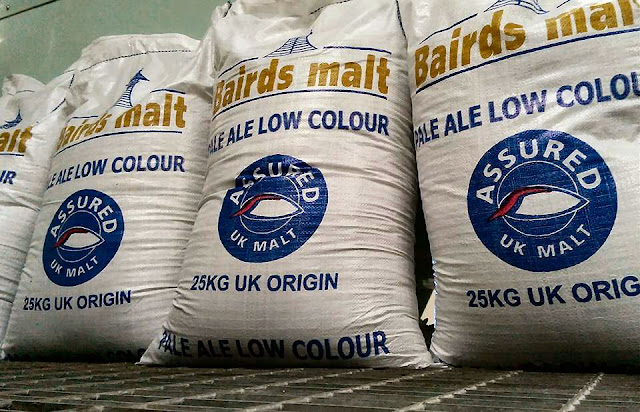 Posted by Gazza Prescott at 22:38 No comments:

You may remember I mentioned we had a pair of Robins nesting between some casks in our dirty cask store a few weeks ago?  Well, today we had a peek between the casks and, after satisfying ourselves that there were no critters lurking within, removed the top cask.... to find an empty nest!

The RSPB guide to Robins says two weeks from hatching to fledging, so looks like we've got a happy family of Robins around the brewery now!  All well and good, as we really needed the empty casks back which they'd been using for the past month; next time, though, maybe a nest box would be an idea?

Posted by Gazza Prescott at 18:26 No comments:

Today we brewed a big batch of "Temple of Love", our 3.8% bitter, hoppy, juicy session pale ale which has, through simple customer demand, become one of the very, very few members of our core range of beer.  So far, so good then.

The problem we have with Temple is that we always make too much of it! The malt we use, Muntons Propino, somehow always conspires to contain more sugars than we expect with the result we have to "liquor back" our brew in the copper.  This sounds complicated, but in essence it means that the resulting wort (unfermented beer) is too high in sugar which means, once fermented, it will be too strong for the beer specifications (temple is 3.8%, HMRC customs allow a brewer 0.5% ABV each way on the declared alcoholic strength if they test it) and so we need to add water to bring it down to the desired sugar concentration.

This is done by adding water from the mains and/or hot liquor tank whilst the wort is still at almost boiling point (so the added water is sterilised) until the required amount (which is worked out with our Beersmith software) has been added, reducing the sugar concentration to the required level; in this case, 1035.5° is the specification.  Today, after adding 175 litres of liquor (what brewers call brewing water, plain "water" is used for washing the floor), we ended up with 1035.7° which is near as damn it!  This should, after fermentation, give us 3.8% ABV which is exactly what it should be, yeast permitting!

The only minor issue with liquoring back is that the total volume of wort increases and, with a big brew, this can mean we're pushing the limits of our fermentation vessel capacity!  Today was one of the largest additions we've done and, as you can see, we're not far off the top.... and that's without the yeast head which has yet to form!

Posted by Gazza Prescott at 00:12 No comments:

We've been putting it off for about a year and can't really afford it, but we have finally accepted the inevitable and ordered another 200 casks!

At present we have approximately 580 casks which may seem a lot but, under the old "rule" of brewery cask management, is actually woefully inadequate; it was always said a brewer needs 2, preferably 3 casks for every one he has out in trade which, given we sell approximately 200 casks a month, would mean we would need a minimum 400 others.... which we don't have.

Now bear in mind this equation was based upon ye olde times when brewers distributed their casks locally and they "turned over" (got them back) very quickly - generally within a few weeks - whereas now casks go to wholesalers hundreds of miles away and may not be seen for months on end; for example, last month we sent pallets of beer out to Manchester, Preston and Stoke, casks we probably won't see again for at least a month, probably two, meaning the old cask equation should really read 6 casks for every one out in trade, meaning we'd need an unfeasible 1500 casks (or thereabouts) to sustain our business.

We're pretty good at retrieving casks and turning them over quickly, but even so some weeks we're stretched to the limit with our casks and just can't rack enough beer to build up any stock.  This means casks being filled then going straight onto pallets and out the door which isn't the way I want to operate, as these casks won't be conditioned enough unless the wholesaler / pubs let them sit for a few weeks once they arrive (we've had no complaints so guessing this is probably happening....).

What we need in order to build up a level of stock which enables us to properly condition our beers and also have a decent list of beer to sell (recently, on occasion, we've been down to our last ten casks of beer to sell which is a ludicrous situation to be in) is more casks, and lots of them.  Given that I don't like metal casks the solution is therefore plastic, and more correctly Brewery Plastics casks.... but, even allowing for their reasonable price of just over £30 a cask, this is still a £6200+VAT investment in casks, money we don't really have....

Just imagine if brewers could, rather than giving 50% of their turnover to the government each month, reinvest some of this money in new casks and equipment?  Fat chance of this happening, but it would make life so much easier and enable us to grow our business so much better than we are able to at present.... we can dream!

Anyhow, we've just ordered 200 new 9 gallon plastic casks (plus 6 extra 4.5 gallon casks which are mainly used at our bar) which will be slightly offset by us returning as many of our 100 rental casks as we can lay our hands on (that'll save us money and get rid of a lot of metal casks in one go) but, even allowing for this, we'll still have extra casks and that'll take some of the pressure off and, hopefully, allow us to build up some stock and sell more beer, which can only be a good thing.

This has been yet another post in our "Crap brewers have to put up with that you don't know about" and I hope it's been educational!
Posted by Gazza Prescott at 00:24 No comments:

Rather than launch into a lengthy monologue or rant, however, I'll be tapping the rich seam of sentimentality which newsreaders call "and finally....." to create a schmoozy sickening kind of post...

We seem to have acquired a brewery pet, and will soon have quite a few more!  A family of robins has taken up residency (literally, they've built a nest!) between two dirty casks in our cask store and was only discovered when Gazza noticed the twigs between the casks and lifted the top one up to see what was going on, to be met with a very angry Robin defending his nest!  The cask was quickly replaced and, despite being very low on casks, we've left them to get on with things and, hopefully, soon they'll be away and we can wash our casks for reuse!

We did add a suet treat for them to eat near to the nest as we're really nice like that.  Even though they're taking up 4 of our precious casks....