Another meet the brewers - Artisan, Buxton

We've got quite a few meet the brewers planned at the present moment, with Derby and Edinburgh coming up soon... for now, however, we headed off to the lovely Derbyshire town of Ashbourne where Artisan is located, the bar run by Paul Duke of the most excellent Dukes Ales beer wholesalers of Buxton.

The event was ticketed and held upstairs in an amazing room with huge crux beams; apparently it's the second oldest building in town!  We presented (talked about, then rambled on about all manner of subjects) 7 of our beers in order...


One amusing incident was when everyone laughed when Sue said "cock".... apparently there had been a sweepstake on when she'd say it!

With pretty much universal good responses from the knowledgeable and engaged audience who asked questions, listened and showed appreciation when required!  The whole thing took a couple of hours and finished, once the last customers had left, with a lot of gin, rum and a bottle of very rare Buxton beer!

Next morning involved a very good quality and large full English before the drive back to Wales...hard work, this meet the brewers lark!


Posted by Gazza Prescott at 21:51 No comments:

When we started the brewery, almost 5 years back, we spent a freezing night in a caravan up in deepest Norfolk to "assist" with the takedown of the old Iceni brewery and transport it down to Wales to form our brewkit.... and if you go right back to the beginning of this blog there are lots of photos of us doing just that!

So what, you might say, big deal.  Well, I mention that as this document recently surfaced in a box of old beery stuff, the original flyer for when Brendan Moore set up Iceni brewery in 1995!  It's a piece of history and important to us as it shows the lineage of our brew plant and things are in a constant state of flux in the industry....

Anyhow, here it is, and it's important to Hopcraft as it's a large part of our day to day life... and shows how times change!  When Brendan brewed on it he made bitters and suchlike, whereas the output now is so different!

Posted by Gazza Prescott at 18:46 No comments:

When people think of meet the brewer events they generally turn to the more well-known and craft-friendly pubs such as the Craft Beer Company in London.  The actual reality of most meet the brewer events is that they are held in a pub which doesn't really want the brewer there, customers who are too pissed to notice and a general feeling of anticlimax and irrelevance...

Well, not this one!  Gazza and Sue did a meet the brewer in the classic back street boozer of the Golden Lion in Penarth with 4 of our beers available and we stuck around until the last train back to talk to the locals about all things beer.

So, not the glitzy highlife most people imagine when they think of a meet the brewer, but in some way much more rewarding as instead of beer geeks we got to talk to down to earth drinkers about what they liked, and didn't like, about the beer! 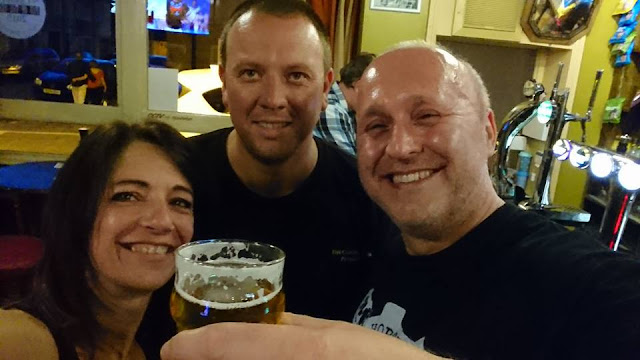 Posted by Gazza Prescott at 14:57 No comments:

Here at Hopcraft we generally use "new world" hops.  This means those from the USA, Australia and New Zealand, although we do carefully select some European hops which we particularly like and even some British ones, especially now the development of new varieties has started to yield results!

Slovenian hops are used extensively in the UK but are one of those which go under the radar with most drinkers and beer lovers knowing little to nothing about them.. Most are based on the venerable (or, depending on your opinion, awful) British Fuggle hop which now - thankfully - taste nothing like them but are still not particularly exciting in the fruity, interesting new world style.

Well, there are some new kids on the block now and they're aiming for a slice of this lucrative market which the new world has had to themselves for a long time.  Step forward, then, a country you'd probably not associate with hop growing but is in fact a big player in the European market and looking to climb the table.... Slovenia.

Slovenia is best known for it's beautiful capital, Ljubljana, and - in beer spheres at least - the Styrian golding aroma hop which comes in various types and strengths.  Now, thanks to alliances with UK hop merchant Charles Faram, new interesting varieties are being planted, grown and evaluated with the most promising planted up for "field trials" and sale.

Two new varieties which have come through this process are Cardinal and Wolf.  Cardinal is more a dual purpose hop with a fruity nose which is quoted as "Apple, Pineapple, Tropical fruits (passion fruit), Strawberries, Anise" and certainly smelt pretty good!  The star of the crop, however, is Wolf which is a bit of a fruit bomb and got a few approving nods from the brewing team when we broke up the cones!  The official blurb promises " Blueberries, Melon, Raspberries, Elderflower, Violet" and, to be fair, many of those were present although it was pure coconut which caught the eye (or nose?) during our first testing of the hop in cask.... but it's the full-on dry hopping test we're looking forward to more!

So, look out for "Wolf", our Slovenian beastie.... one shot only unless it's really well received then we may have to look at a repeat! 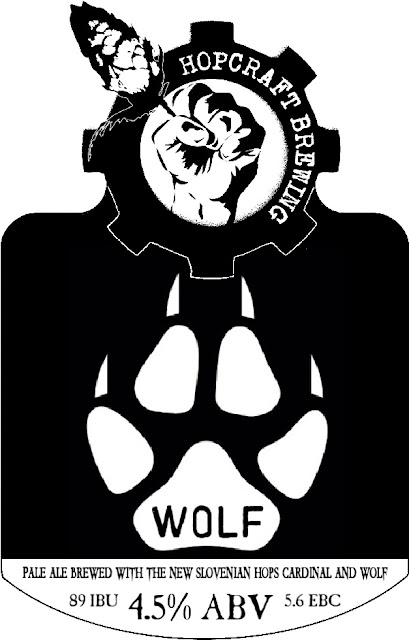